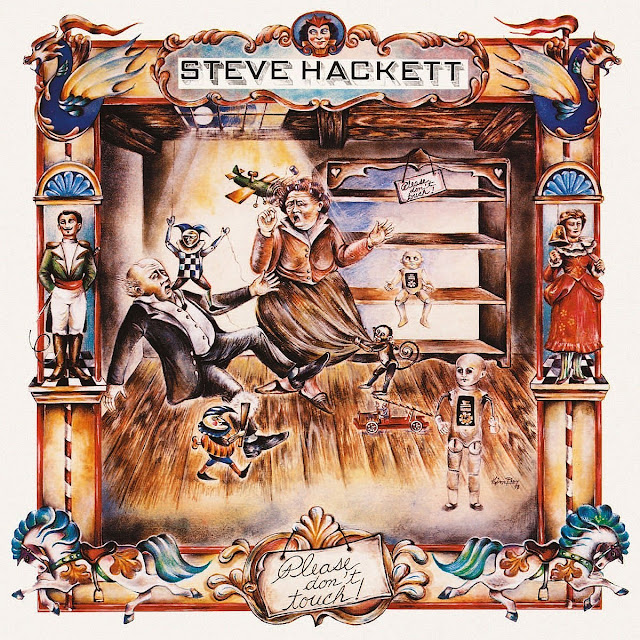 "Please Don't Touch" is the second solo album by English guitarist Steve Hackett, and his first after leaving Genesis in June 1977 (following the tour that would be documented on Seconds Out), and started his solo career. Unlike the debut album "Voyage of the Acolyte", which was a largely instrumental concept album steeped in the progressive rock idiom, this record is primarily a collection of songs featuring guest vocalists Richie Havens, Randy Crawford, and Kansas' Steve Walsh (their Phil Ehart also chips in here on drums). Although the sum effect is something of a patchwork, the individual pieces are often lovely. Over his career, Hackett has shown a propensity for extremes, in this case letting the jazzy and sentimental "Hoping Love Will Last" segue into the musical maelstrom of "Land of a Thousand Autumns" and "Please Don't Touch" (which will delight fans of Hackett's first record, although the Caroline CD inexplicably pauses too long between the two). In a nod to King Crimson (specifically Lizard), the title track is quickly cut off with the quirky carousel sounds of "The Voice of Necam," which itself dissolves into a mix of airy voices and acoustic guitar.

The best tracks belong to Richie Havens: "How Can I?" ("Hackett"'s take on Peter Gabriel's "Solsbury Hill") and the conclusive "Icarus Ascending." Hackett is no singer, so he wisely masks his voice in a "laughing gnome" effect on the delightful "Carry on Up the Vicarage" and hides behind Walsh's lead on "Narnia" and "Racing in A." Perhaps taking his cue from Gabriel (whose debut had appeared in 1977), Hackett seems eager to show his range as a songwriter. While he clearly has a closet full of good ideas and a genuine knack for interesting arrangements, Hackett is too much the eccentric Englishman to appeal to broad commercial tastes. Please Don't Touch remains a uniquely effective amalgam of progressive rock and pop; like his first album, he never made another one quite like it, perhaps because he again taps the concept's full potential here...

"Please Don't Touch" contains a myriad of musical styles that many were either rejected or never put in front of the "democratic process" which Genesis was known for, which also was amongst one of the reasons that Steve would leave the band. This album, of the many he had released, had finally shown the compositional side of Steve's talent and would prove how valuable his contributions to Genesis were. Rumour has it that the title track was rehearsed and but later rejected by Genesis, when drummer Phil Collins said that he "could not get into it". The album featured a plethora of musical stars, including R&B singer Randy Crawford, American folk icon Richie Havens, the drummer and vocalist for the progressive rock band Kansas (Phil Ehart and Steve Walsh respectively) and Frank Zappa alumni Tom Fowler and Genesis concert drummer Chester Thompson. In 2005, Please Don't Touch was remastered and re-released by Hackett's Camino Records label. The new edition features updated liner notes and three bonus tracks.

Another excellent Hackett masterpiece. The music on the remastered CD version is diverse and yet may be the most accessible of his early recordings. There are guest vocalists on many tracks, which is a plus. The songs are shorter than usual but pack everything from folk ballads to classical guitar."Narnia" features Kansas vocalist Steve Walsh, and is based on C.S. Lewis' books. This is a great tune, very upbeat, with an excellent performance by Walsh; it's catchy enough to have been a radio tune. "Carry On Up the Vicarage" opens with a toy piano and sound effects with Christmas songs being sung; the music is very eclectic, with the vocal having a childlike effect in one ear and a deep vocal in the other."Racing in A" again features Walsh with another excellent performance that is heavy rock with some nice mellotron work, again upbeat, a lot of stop and start at the end."Kim" is a classical guitar piece with flute."How Can I" features the unlikely pairing of Hackett and Ritchie Havens; it's an acoustic guitar piece with Havens on vocals.

I really like Havens' singing here."Hoping Love Will Last" is a piano vocal piece, a ballad, and has kind of a R&B feel. Very different from anything he has done before or since for that matter, but a very pretty song, that ends up very well-orchestrated."Land of a Thousand Autumns" and "Please Don't Touch" share the same theme for the most part, the first being atmospheric, and the latter is an in your face instrumental with very powerful guitar, bass pedals, keyboards and sound effects."The Voice of Necam" again uses the theme of the prior, played on a creepy sounding organ again with sound effects, music expands with voice effects and acoustic guitar. "Icarus Ascending" features Havens on vocals, very dramatic and dark at times, lush instrumentally, end is very eclectic with short sections of reggae, jazz, and lots of guitar effects.