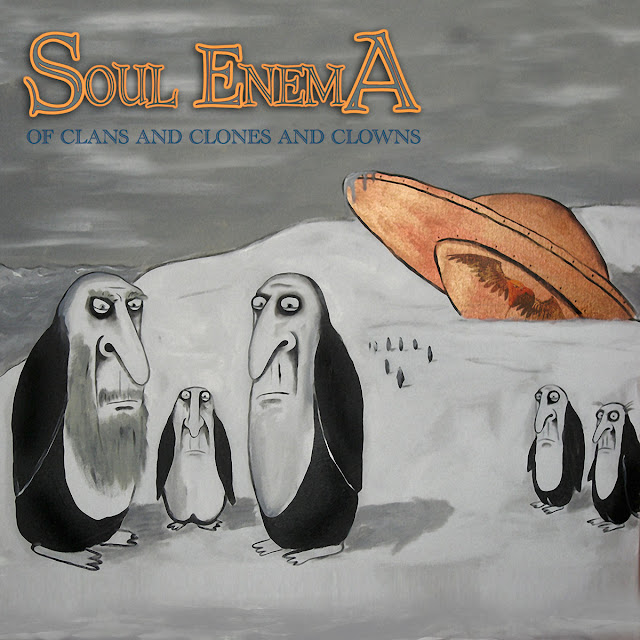 Although founded all the way back in 2001, the humorously named Israeli band Soul Enema has only released a mere two albums beginning with 2010's debut "Thin Ice Crawling" and at long last the follow up has emerged in 2017 in the form of "Of Clans And Clones And Clowns". Main man and founder Constantin Glantz readily admits he is the utmost perfectionist when it comes to creating his music and just like the debut, the listener is treated to an equally compelling eclectic musical ride with every element ratcheted up a few more notches. Glantz is the only common thread between the two albums and all other performers are completely new to the Soul Enema scene. While the debut had five full time musicians and four guests, "Of Clans And Clones And Clowns" still has five core musicians but has a whopping eight guests including Arjen Lucassen of Aeryon fame providing a cameo guitar solo on "Eternal Child" and fellow Israeli Yossi Sassi providing the unique sounds of his bouzoukitara on "Aral Sea II - Dustbin Of History." The album took a staggering seven years to make and and therefore leaves no "i" undotted and no "t" uncrossed. This is a project of passion, a labor of love and despite the trials and tribulations involved in the making, turned out to be another resounding success.

Due to all the attention paid to every little detail, "Of Clans And Clones And Clowns" comes off as a slick and serious project where every idea and composition is careful crafted and placed in the proper place as to create the perfect musical flow of ideas and energies. The emotional gamut runs from the apocalyptic "Aral Sea" three part suite to the silliness of the title "The Age Of Cosmic Baboon" and other moments of desipient amusement. Much attention is paid to the production as well and despite being rather complex and multi-layered, the album retains an organic spontaneous feel that surprisingly doesn't sound overproduced at all and contains no excess fluff added for fluff's sake. Right from the beginning track "Omon Ra," Soul Enema displays the same eclectic fusion of several genres all stitched neatly into a nice musical collage of styles and sounds. The heavy metal guitar riffs overlap with other polyrhythms including Middle Eastern sounds and symphonic prog style keyboard assaults. The diversity of the tracks keeps the album interesting with Noa Gruman's vocals adding a more diverse range than her than her predecessor on the debut. Likewise there are many more elements lurking around every corner and at times even reminds of how The Beatles would layer contemporary rock over more traditional styles of music with one example of how "Spymania" takes its Vaudville tinged prog metal and allows a more traditional anachronistic musical form to emerge as the heavier parts fade out.

So many elements going on here it's impossible to describe them all. The common thread is that much attention is paid to catchy melodic hooks that take on crossover prog possibilities. The heaviness alternates between full-fledged progressive metal riffing to calmer melodic rock to simple piano runs. There are many ethnic influences as well with tracks like "The Age Of Cosmic Baboon" sounding completely exotic with Middle Eastern rhythms and percussion with the added mystic flair of the sitar. The mix of the rhythmic elements with the atmospheric is utterly fascinating as they seamlessly weave around each other in perfect unison. Heavy guitar parts can abruptly shift to a more symphonic prog segment with folk fueled flutes fluttering away as one melodic segment cedes into another. The pace is perfectly set for each part to connect to what has already occurred and what is yet to come. While most tracks have a metal or rock feel in nature, some like "Last Days Of Rome" bring good old-fashioned piano rock to mind with artists like Carole King coming to mind although with a zillion other elements tacked on in crossover prog fashion of course! "Dear Bollock (Was A Sensitive Man) is another exotic sounding track with Glantz showing off his Japanese shamisen playing skills and although there are metal riffs added for bombast, it comes across as a mad rush down the silk road of some sort.

Despite the parade of ideas floating around on any given track, the three part suite "Aral Sea" is perhaps the most progressive rock in feel with three long suites that feature a diverse rotisserie of moods and represent the ultimate demise of the famous sea that went from Garden Of Eden fertility to the dusty barren wasteland it is today due to human carelessness. The suite begins with "Aral Sea I - Feeding Hand" that tells the tale of the fertile life giving sea that demands respect in exchange for provisions with heavy rock guitars, melodic piano runs and Noa Gruman providing one of her most dramatic vocal deliveries. "Aral Sea II - Dustbin Of History" picks up the pace a bit adding a bit more eclectic polyrhythms in a more Middle Eastern feel but quickly turns to sadness with dynamic electronic effects and heavy metal riffing suddenly simulate the once productive sea being siphoned of its life giving vitality. This second suite installment has a unique Far East vibe due to the presence of Yossi Sassi providing the unique sound of his bouzoukitara adding a truly exotic flair as the Middle Eastern meets metal riffs dance around one another. "Aral Sea III - Epilogue" has the expected ending of demise but performed with an interesting intro of discordant piano and percussion and ultimately sang out by Gruman's powerful vox box. This finale has Sergey Kalugin of the Russian prog rock band Orgia Prevednikov making a cameo on acoustic guitar.

Glantz is an excellent self-promoter as he describes this album as a creative diverse rock / metal album that explores vast melodic and rhythmic territories that takes elements ranging from Abbato Zappa, from King Crimson to King Diamond between East and West and way beyond in a true progressive fashion. While those words are delivered in a slightly cheeky way, they actually ring true as well as Glantz is interested in making progressive prog instead of the factory line varieties. With more elements than the periodic table, Soul Enema delivers an outstanding sophomoric epic journey that takes the best elements of prog, rock and the entire Putumayo World music catalogue and runs away with it! It truly is impressive and adventurous without ever getting weird for weird's sake. It remains completely accessible while dishing out unorthodox exaltation. While "Thin Ice Crawling" was a major step in achieving something great, "Of Clans And Clones And Clowns" actually fulfills that mission and one of the best albums of the year that i've heard so far. It is fearless as it shamelessly throws the sensual and the bombastic in a cage together and let them duke it out. The result is a not a musical death match but rather a triumph of sonic cooperation that demonstrates the possibilities of musical genre blending when proper care is taken to the details. Unlike the debut album, this one at over 72 minutes doesn't wear out its welcome by the the time the last tracks finally crank up. This album is quite the accomplishment.