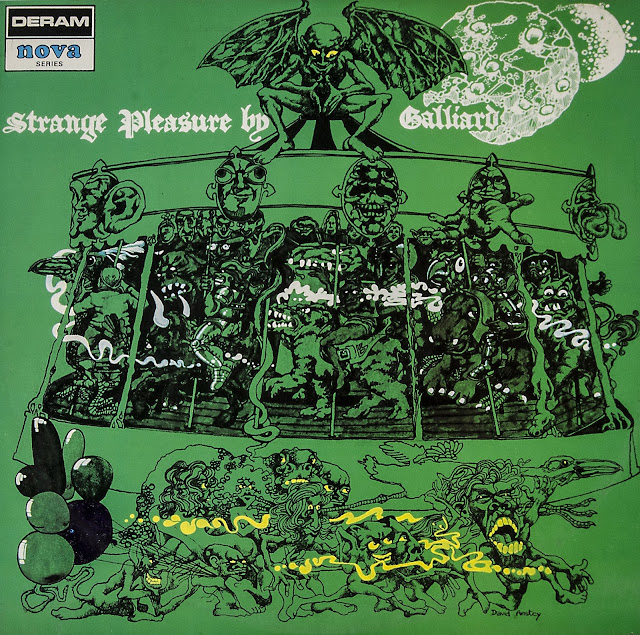 Galliard, formed in Birmingham during the summer of 1968, were one of the few progressive rock bands to come out of Birmingham. They were, in essence, a much-augmented later metamorphosis of Craig, the four-piece who recorded the fearsome 'I Must Be Mad'. Galliard cut two albums, 'Strange Pleasure' and 'New Dawn', released on the Deram Nova label, both of which were produced by Phil Wainman, drummer and future Bay City Rollers' manager. The four members of Craig went their separate ways in 1966. Carl Palmer went off to join Chris Farlowe's Thunderbirds, and then went to 'The Crazy World of Arthur Brown'. He later became part of the very successful 'Emerson, Lake & Palmer' trio. Geoff Brown went off to British Leyland's computer department as a programmer, which stood him in good stead when many years later he set up an international game publisher, US Gold. Len Cox dropped out of the music scene to reappear many years later as a priest. Richard Pannell went on to finish his electronics' degree - the skills gained proving very useful when he later became the sound engineer for ELO.

After Craig, Richard Pannell began playing guitar semi-pro with an Irish showband led by vocalist John Fitzgerald called 'The Castaways' (coincidentally the same name as the first band Geoff and Richard formed in '62, which later became The King Bees). Also playing in the showband were John Smith (sax), Dave Caswell (trumpet), Andy Abbott (bass), and drummer Frank McGonagle. In late 1967 Richard asked Geoff if he would like to join the band on a semi-pro basis as it was only playing weekends and Geoff agreed. Like most Irish showbands at the time the music was an eclectic mix, but what worked really well were the soul-based Stax-type songs with the brass section. Tiring of the Showband scene, Geoff suggested they form a regular band and concentrate on the soul aspect of the music. Stax was the vogue label at the time and with the brass laden tracks they were ideal songs for the band to cover. Geoff was singing confident lead vocals having cut his teeth on blues with the King Bees. In mid-1968, the band was launched as 'Immediate Pleasure' and played the local clubs such as The Rum Runner and The Cedar Club, gaining a small but enthusiastic group of fans.

Like most bands there are a couple of seminal things that influence the direction and musical genre that any band decides to play; the ability and influence of the leading band members, and the prevailing styles of music around at the time. In the case of Immediate Pleasure it was Geoff's eclectic music tastes linked with Dave and John's jazz background plus Richard's expertise in electronics and experimentation. In addition, groups were emerging in the USA that included brass sections in the line-up, the most notable being 'Blood, Sweat and Tears' with their 1968 album 'Child is Father to the Man' followed in April 1969 later by 'Chicago' with 'Chicago Transit Authority'. Both these bands at the time seemed to Geoff to be an exciting new genre of music that Immediate Pleasure could tackle as it had the line-up to attempt it. It also sparked off Geoff's songwriting skills again. A somewhat obscure North American group called 'Ars Nova', who released an album Ars Nova in 1968 that had an intriguing mix of psychedelic rock with classical overtones and a brass section, caught the band's interest. The iTunes review of the album almost sums up where Galliard's initial inspiration came from: "There are haunting tunes with a folk-rock base and a faint Renaissance ballad melodic influence - and harder rocking period psychedelic tracks with a bent for unpredictable bittersweet progressions and vocal harmonies..."

This eclectic mix was the spark for Geoff to ignite the inspiration for Galliard. The galliard was a popular medieval dance of the 16th century and, influenced by the sound of Ars Nova, Geoff wrote a song for the first album called 'Frog Galliard' and named the band after it. Strangely enough, for a relatively unknown band, Ars Nova must have been listened to by other Birmingham musicians as one of their album tracks 'Fields Of People' was released by The Move on their 1970 album 'Shazam'. There were other influences in the band though which came from the jazzy brass section and also the early blues songs that the King Bees had played. Slowly, but surely Galliard was developing its own eclectic style. Frank, the drummer, was not interested in the new direction the band was taking and the search was on for a drummer that would complement and enhance Geoff's Galliard songs and the final piece of the Galliard sound came when Les Podraza joined the band in February 1969. Les was a young, local Birmingham musician who had just come off tour with Tim Rose where he replaced John Bonham on drums.

He was very creative and so with Les's drumming and Andy Abbott's original tight bass playing the rhythm section was complete and could easily match the different styles that the band was incorporating. Andy, very influenced by the playing of Blood, Sweat & Tears' Jim Fielder, was also taking some lead vocal parts and singing harmony with Geoff to augment the overall vocal sound. Once Les joined the band, they started to gig solely as Galliard with original material mostly provided by Geoff. Galliard was still operating semi-professionally, but was building up a major following around the Midlands and on the college circuit, and was starting to support headlining bands - sometimes stealing the show! The band was managed at the time by Alan Clayton of Astra Agency in Wolverhampton, and it was Alan who arranged for Galliard to audition for a new record producer, Phil Wainman, who was looking to step into the emerging progressive rock scene. Decca were launching a new progressive label at the time, Deram Nova, and Galliard produced by Phil was an ideal band to be amongst the first wave of album releases.

By this time, Galliard had amassed enough songs to fill an album and went into Olympic Studios in London to record their first LP entitled 'Strange Pleasure', the fourth album released in the Deram Nova catalogue in November 1969. The mix of songs was very eclectic with the opening track being an arrangement of an old traditional blues classic 'Skillet Good 'n Greasy' first heard by Geoff on Davy Graham's 'Folk, Blues and Beyond' 1964 album - but what an arrangement, with classic guitar build-up riffs, plus a blasting horn arrangement straight out of the BS&T bag. The album also included Galliard's first single, 'I Wrapped Her In Ribbons' a haunting folk-type song punctuated with a brilliant brass arrangement and great trumpet solo in 5/4 time (edited out for the single). The B-side was 'The Hermit And The Knight', a song written by Dave Caswell and included on the second Galliard album. An interesting note is that, of all people, Frank Ifield recorded Galliard's I Wrapped Her In Ribbons as a B-side to his single 'Three Good Reasons' in May 1970. Why, or how, he chose the song Geoff has no idea. Other highlights of the album were backward guitar solos, sound effects, harmonica and classical trumpet solos amongst other original touches.