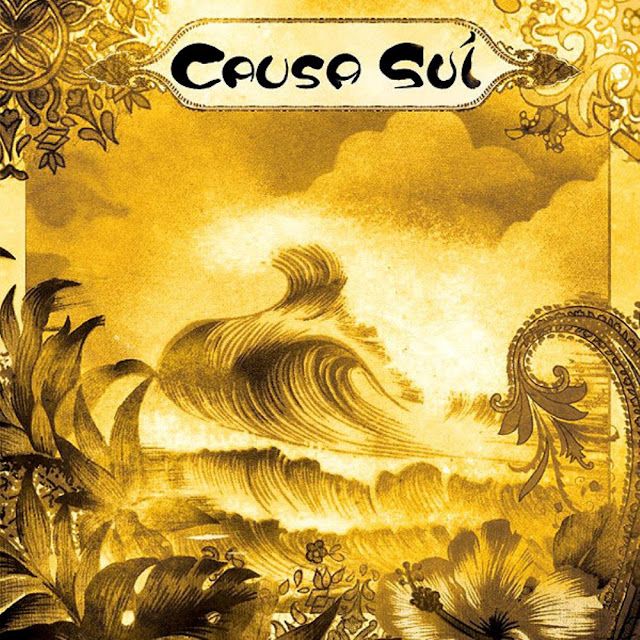 The sun slowly breaks through the dark night with its orange light. The gentle breeze slowly evaporates as the temperate goes higher and higher, the air also becomes thicker and warmer. You feel the sweat gluing your shirt to the body, as you make your way to the beach to meet up with your friends. The heat is only bearable in the shades, but you don’t mind as you enjoy the summer day, with all your troubles, hardships and anxieties being forgotten even for just a short time. You’re glad to be alive, you lust to remember every moment from 8 to 10PM, when the last rays of daylight finally die out, and the cooling night takes over.

I’m absolutely sure anybody went through this experience many times in their life and Danish powerhouse Causa Sui now have spent more than a decade to capture that feeling of enjoyment in musical form. Their flowing compositions are a psych-heavy, often spacey, other times dreamlike combination of the thick, riff-centric and specific sounding of stoner rock, and the feel-good vibe and aesthetic of beach rock. Imagine the Beach Boys jamming with Monster Magnet while smoking weed and putting some old-school Uriah Heep and Eastern influences into the mix and you might get a clearer picture on what they deliver.

Their technically accomplished yet naturalistic musicianship and capability to surf around the numerous genres they incorporate, resulted in some of the most purely enjoyable and adventurous stoner records in recent memory. Whether it’s the completely loose, jazz-like flow of the Summer and Pewt’r Sessions or the more “traditional” structured songwriting of their other albums. Stylistically their 2005 self-titled debut contains the seeds of both sides. It’s imperfect, sometimes not fully cohesive, indulgent, but also entertaining and relaxing.

“Ventura Freeway” starts off the album not only in quite a spectacular fashion, but also serves as a textbook display of Causa Sui’s dense and heavily textured sound of grandiose and building momentum, as two minutes of airy guitar chords and feedback gets suddenly streamlined into an infectiously catchy, mid-paced riffage with harmonic leads placed between them. And even five minutes into the song, it keeps getting even bigger with the shouting vocals, the uncontrolled shredding and the disciplined rhythms colliding into frantic raw power and energy. This is how you pull the listener into an album.

It’s a bit of a shame although not surprising that the record doesn’t maintains this level of intensity, and as the rest of the track dives into different numerous soundscapes and harmonies. We have straightforward, 70’s influenced hard rock tracks like “Tornado Eye”, light-hearted, calmer interludes like “Lelalni” as well as songs that transitions between these two in “Where The Streams Collide” where the Eastern, sitar sounds of the verses suddenly get cut off by the heavy, booming distortion of the chorus. And of course there’s the stoner standard 10+ minute epics where the band can fit everything in one place from the groovy, blues-rock to otherworldly, space rock jamming to acoustic breakdowns and maniac, Jimi Hendrix-esque LSD influenced shreddings.

The sound is dynamic and balanced giving the right amount of space to every instrument, while also leveling up the thickness of the overdubbed vocals and the often multiplying guitar layers. The performances are equally loosed-up, relaxed yet flourish with thoughtful musicianship. The only downsides I can reasonably come up is that some of the songs are not memorable, and that the overall delivery is doesn’t feel as original nor as organic as their more recent records. But overall Causa Sui’s debut is a fine, very solid stoner record that contains the exact amount of great riffs, trips and out-of-body feeling that psychedelica fanatics want.