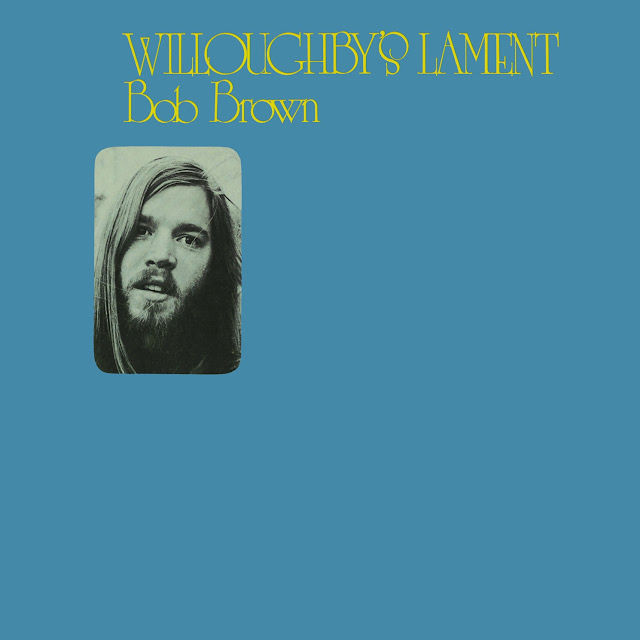 In December 1971, Billboard magazine wrote, "Willoughby’s Lament" conveys a quiet tenderness and charm. With this album, D.C. singer-songwriter Bob Brown delved deeper into the jazz and classical-influenced folk sound established on The Wall I Built Myself, his 1970 debut. Willoughby’s Lament was chapter two for Brown, and the musician’s craftsmanship and experience lent the LP a spiritual energy that remains intact decades later. One of the record’s most transcendent tracks is “In These Flames.” He wrote this powerful song in 20 minutes while fighting the flu, and folk legend Richie Havens covered it on his 1971 album The Great Blind Degree. Havens and Brown hit it off after a chance encounter in 1966. Havens signed Brown to his MGM label, Stormy Forest, and produced his first two albums.

Brown picked up the guitar at 14 and began playing in D.C. coffeehouses before graduating from high school. He put together his core ensemble - guitarist Orin Smith and multi-instrumentalist Joe Clark - while a freshman at the University of Maryland. That’s also where Brown met his muse, Pamela, and where he completed the compositions for "The Wall I Built Myself". After completing his debut, Brown added two new musicians to his band, violist Rusty Clark and drummer Rob Windsor. In the summer of 1970, when Brown started writing "Willoughby’s Lament", he brought the band to a Baltimore club called the Classroom. The Baltimore venue, like D.C.’s esteemed Cellar Door, attracted its share of regulars and luminaries, among them rising star Emmylou Harris. Brown and Harris would go on to split a concert bill at George Washington University.

Iconic D.C. radio personality Don “Cerphe” Colwell conducted his first of many interviews with Brown for progressive rock station WHFS. “Usually, you’ve got musicians who can either write or sing or play or maybe two out of those three things. But Bob could do all three things really well. He was a great writer, great singer, and great player, and he was great onstage,” says Colwell. “Listeners found and gravitated toward him, loved his music like I did.” Colwell says he played The Wall I Built Myself on the air “quite a bit.” As Brown worked on "Willoughby’s Lament", his relationship with Pamela dissolved. The break-up inspired “Death in Dreams”, a stark lamentation influenced by Neil Young. Brown spent most of the writing process while on the road opening for Havens, who was riding high off his star-making performance at Woodstock. They traveled to college towns, Kansas City, Bloomington, Madison and played for crowds as large as 10,000.

Brown’s biggest show with Havens took place in October 1971. Brown and his ensemble flew to London for a sold-out show at the iconic Royal Albert Hall. “It was the crowning jewel for opening acts,” says Brown.  The show was a break from the "Willoughby’s Lament" sessions recorded at RKO General Studios in New York because of Havens’ fascination with recording on 35-millimeter film. Havens brought in peerless bassist Eddie Gomez, who was discovered by pianist Bill Evans and performed with jazz legends Miles Davis, John Coltrane, and Herbie Hancock. Brown was blown away by Gomez’s intuitive musicianship. He synchronized with Joe Clark, Orin Smith, and Rusty Clark and added a new dimension to Brown’s music by progressing the alchemical, haunting interplay among band members. Havens offered Brown the assistance of a handful of famous studio musicians, including renowned Grammy winning composer Jan Hammer. Brown turned down the offer. “I didn’t think anybody else could do what Joe and Orin could do,” Brown says.

Like "The Wall I Built Myself", the intimacy of "Willoughby’s Lament", combined with Brown’s soulful vocals, creates a mix of raw tenderness and power. This was a departure for Brown, who explored a new realm by focusing on the piano. This style expresses the influence of his pianist grandmother, who played classical music for him when he was a child. Brown also expanded his sound on the title track, a two-part suite featuring a string ensemble arranged by Jeff Kaufman. "Willoughby’s Lament" fulfilled Brown’s two-album deal with Stormy Forest, and he parted ways with the label in 1972. Brown moved to New York and lived in the Chelsea Hotel as he continued to write and perform. He went on to record three more albums - two with renowned producer and engineer George Massenburg and one with Greenhouse and the Eagles’ Steuart Smith. None of these records saw the light of day, and Brown abandoned his career in the early 1980s.

Brown eventually found success in the hospitality industry. Today he’s a trainer, author, and keynote speaker, using his insights to help companies like Disney, Marriott, and Ritz-Carlton. Brown tours the world as a consultant, which is how he met his wife, Judith. As his second career took off, Brown’s music didn’t entirely disappear. His records have long been out of print and hard to locate, but in recent years fans have come out of the woodwork to find the LPs and the man who made them. Tompkins Square has rescued "The Wall I Built Myself" and "Willoughby’s Lament" from oblivion with official reissues on CD. More than 40 years have passed, but the albums still hold the effervescent spark that made Brown’s work irresistible. The records carry the spirit of his close collaborators who have since passed - Joe Clark, Orin Smith, David Franks, and Richie Havens.

Together they brought the work of Bob Brown to life, and since then the world continues to seek out his special brand of magic. For producer and future collaborator Mark Greenhouse, Brown’s music remains unparalleled, and "Willoughby’s Lament" was life-changing. “It was a lovemaking event - the songs, the music, the sound, the composition and the instrumentation caressed me, entertained me, excited me, and steered me into a life of music,” says Greenhouse. “Each time I listened I heard something new, always discovering something unpredictable and unexpected.”