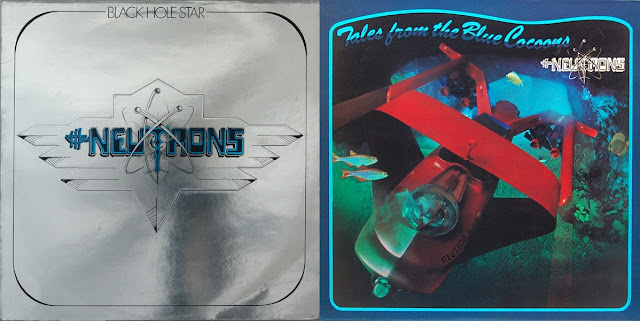 Released in 1974, Neutrons debut album clearly highlights where the most of the creative input to the Man albums, "Be Good To Yourself At Least Once A Day" and "Back Into The Future" came from. No wonder that the departure of both Ryan and Youatt caused a collapse (at least temporarily) of the Man band. The album opens with "Living In The World Today", one of two tracks laid down during the first recording session and features just three of the band members namely Youatt, Ryan and Weathers. The track blends the classic seventies progressive rock with a touch of fusion with what could be described as Hawkwind meets Amon Duul II, though Ryan's organ solo towards the end ensures that this track is in a class of its own.

"Feel" was the only track on this album penned by Martin Wallace who also tackles the acoustic guitar and lead vocals on this piece. In fact there is a noticeable difference in musical styles between this track and the rest of the album. An acoustic track without any instrumental sections, this track suffers from a sixties Summer Of Love factor. Even drums are absent with the hand drums taken up by Pique (Pick Withers, later drummer with Dire Straits). "Mermaid And Chips" must have been a track written during the Piblokto days as listed in the songwriting credits is lyricist Pete Brown. Only Phil Ryan from the original members participates on this track and he shares vocals on this piano dominating rack with Caromay Dixon. Also involved with this track is Stuart Gordon who was in charge of the strings for this track which act as a filler to the piano and voices. A delicate track which however fails to leave a lasting impression as it runs somewhat in the middle between being a ballad and a progressive rock track. Towards the end of the track the momentum seems to pick up with the introduction of an organ while the vocals seem to multriply in effect with the introduction of harmonies, yet it somehow seems to lose its plot and become slightly repetitive and boring.

"Dangerous Decisions", the closing track to Side 1 features what one could term as being the classic Neutrons linup, at least for this album. Ryan, Williams, Youatt and Weathers have a go at this rocker of a track which opens with a piano segue which gradually picks up in momentum to progress into a true progressive instrumental track. Synthesizer breaks lead the way on this track accompanied by the rest of the group producing a rhythmic backbone, until interrupted by Williams' wailing guitar which heralds a change in tempo as well as sound. Once again synthesizer intervenes to claim musical leadership till the end. An excellent way to close the first side. "Doom City" opens side 2 with the track referring to Port Talbot. The track was a collectively written number originating from a jam with lyrics by Youatt and the introduction by Phil Ryan. The basic structure of the track is well set within the blues section, as can be expected from a song written during a jam session! Though the backbone remains within the R&B, the track is a good slow-tempoed rocker.

"Dance Of The Psychadelic Lounge Lizards" was the track used by the group as a single and is dedicated to the memory of the late great Graham Bond, who had died just months prior to the release of the album (5th May 1974). Of particular interest is the utilization of Stuart Gordon's violin playing alongside a psychedelic (as the name implies) piece of music. The sound at times is reminiscent of Gentle Giant (even though it is one of the few tracks not to feature Williams on the drums!) as the track delves into ear-friendly commercial territory to suddenly zoom out with a quick time change and almost discordant section. Most definitely one of the highlights of the album. "Going To India" opens with a grandiose piano/organ introduction coupled with some harmony to suddenly fall into an acoustic mode and of course the occasional musical diversion with various Middle Easter, influences, especially towards the end with the entry of the sitars. "Snow Covered Eyes" is the second of tracks that the trio of Youatt, Weathers and Ryan recorded the first time they got together for recording purposes together with "Living In The World Today". In fact they saw it fitting to open and close the album with these two tracks. Once again the style is different from what the rest of the album offers with the theme lending towards a more rockier style together with a lengthy and interesting organ solo. Listening to this album one can realise were the creativity for the Man album, "Be Good To Yourselves At Least Once A Day" came from and thus it is not surprising that the departure of Youatt and Ryan from their ranks to form Neutrons almost caused a collapse of the band.

"Tales From The Blue Cocoons" opens with A Youatt track, "No More Straights" which picks up from where the band left off stylistically on "Black Hole Star". The track in itself is a straight forward rock number with plenty of undistorted guitar work, almost delving into the psychadelic with a short vocal section followed by a lengthy instrumental piece. "Northern Midnight", a Wallace penned track, sees the appearance of Caromay Dixon who on this album takes up a more prominent role than on the debut. Vocals duties on this track are shared between Wallace and Dixon, much like happened on "Feel", the only Wallace track on the debut album. Musically it seems that Wallace seems to prefer an acoustic based touch to his music as the track rarely moves away from an almost folky feel. "Come Into My Cave" (Youatt) has the group returning to their blues-based rock coupled with tinges of psychadelia, as they once again show an amount of musical diversity with Youatt and Williams indulging in a lengthy guitar solo followed by a spacey keyboard solo. This album is one of the highlights of the album and features some excellent material that the group should have tried to consolidate on.

"Live Your Life" is Williams' first (and only) track on a Neutron album and is strikingly different from the rest of the material present on any of the two albums by the group. An extremely short track at just under two minutes, it was probably added in as a filler when the short length and lack of material for the album became apparent. It features just him on acoustic guitar accompanying Caromay Dixon on vocals. Her voice is a pleasure to listen to, yet it is out of place on this album with its folk touch especially when compared to what the group had produced so far (in musical terms). The soft folk touch is carried over to Side 2 of the album with "L'Hippie Nationale". However, the track does pick up halfway through with the introduction of more of a beat as well as Youatt's voice as he takes over lead vocal duties and tends to lead the band out of the folk rut it seems to be getting stuck into. "Take You Further" is the first track that Ryan contributed to on this album, though it is co-authored with Wallace. It features a return to the style that is not too distant from that of the first album and one can immediately sense that Ryan's musical direction lay in a more experimental  orientated mode than that of Youatt. It could be considered as one of the more progressive tracks on the album with a lengthy keyboard solo which is something that this album sorely lacks. In fact it shows clearly that the Ryan touch was absent from all of the first side of the album.

"Welsh R Blunt (Or The Dexidrine Dormouse)" is a track that dates from the days that Ryan was in Piblokto and had also featured in Man's live sets but for some reason did not work out and was thus discarded. Ominously, Youatt does not appear on any of the last two tracks of the album, "Welsh R Blunt" and "The Jam Eaters". This latter track is a totally instrumental piece with the group playing in a manner that was surprisingly absent from the album, especially after hearing the debut. A bombastic keyboard sound heralds the entry of the track which however is not as powerful as the introductory segment. Of interest on this track is William's handling of vocal duties with Caromay Dixon. The track progresses into an upbeat piece of music that almost verges on the Renaissance-style as guitars and keyboards duet away to David Charles' solid backbeat. Possibly these last two tracks on the album were also the last to be recorded and for which Youatt was too ill to attend. However the total lack of musical collaboration between Ryan and Youatt as well as the lack of musical consistency present makes the album a disappointment when compared to what the album promised. Individually this album still makes a good listen, but from the progressive point of view it is the first album that should appeal to the progressive rock fan.