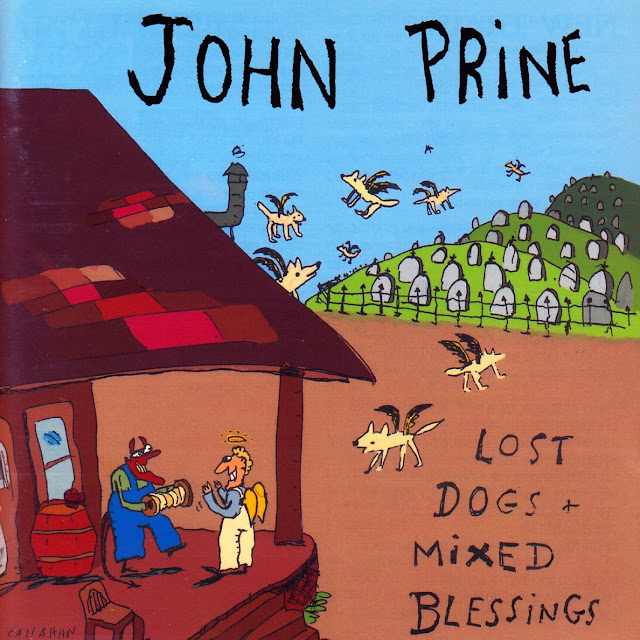 John Prine, born October 10, 1946, is an American country folk singer-songwriter. He has been active as a composer, recording artist, and live performer since the early 1970s, and is known for an often humorous style of country music that has elements of protest and social commentary. Born and raised in Maywood, Illinois, Prine learned to play the guitar at the age of 14. He attended classes at Chicago's Old Town School of Folk Music.[1] After serving in West Germany with the U.S. armed forces, he moved to Chicago in the late 1960s, where he worked as a mailman, writing and singing songs as a hobby. Becoming a part of the city's folk revival, he was discovered by Kris Kristofferson, resulting in the production of Prine's self-titled debut album with Atlantic Records in 1971. After receiving critical acclaim, Prine focused on his musical career, recording three more albums for Atlantic. He then signed to Asylum Records, where he recorded an additional three albums. In 1984 he co-founded Oh Boy Records, an independent record label with which he would release most of his subsequent albums. After his battle with squamous cell cancer in 1998, Prine's vocals deepened into a gravelly voice, resulting in the award-winning album "Fair & Square" (2005). Widely cited as one of the most influential songwriters of his generation, Prine is known for humorous lyrics about love, life, and current events, as well as serious songs with social commentary, or which recollect melancholy tales from his life.

In 1971 Prine's self-titled debut album was released. He and friend Steve Goodman had each been active in the Chicago folk scene before being "discovered" by Kris Kristofferson (Kristofferson remarked that Prine wrote songs so good that "we'll have to break his thumbs"). The album included his signature songs "Illegal Smile," "Sam Stone," and the folk and country standards "Angel from Montgomery" and "Paradise." The album also featured "Hello In There," a song about aging that was later covered by numerous artists, and "Far From Me", a lonely waltz about lost love for a waitress that Prine later said was his favorite of all his songs. The album received many positive reviews, and some hailed Prine as "the next Dylan." Bob Dylan himself appeared unannounced at one of Prine's first New York City club appearances, anonymously backing him on harmonica. Prine's 2nd album "Diamonds In The Rough" was a surprise for many after the critical success of his first LP; it was an uncommercial, stripped-down affair that reflected Prine's fondness for bluegrass music and features songs reminiscent of Hank Williams. Highlights include the allegorical "The Great Compromise," which includes a recitation and addresses the Vietnam War, and the ballad "Souvenirs," which Prine later recorded with Goodman.

Subsequent albums include "Sweet Revenge" (1973), containing such fan favorites as "Dear Abby," "Grandpa Was A Carpenter," and "Christmas In Prison," and "Common Sense" (1975), with "Come Back to Us Barbara Lewis Hare Krishna Beauregard". The latter album was Prine's first to be charted in the US Top 100 by Billboard, reflecting growing commercial success. It was produced by Steve Cropper. Many veteran Prine fans view the release of 1978's "Bruised Orange" as a creative highpoint. The Steve Goodman-produced album gave listeners songs such as "The Hobo Song," "Sabu Visits the Twin Cities Alone," and the title track. In 1974, singer David Allan Coe achieved considerable success on the country charts with "You Never Even Called Me By My Name", co-written by Prine and Goodman. The song good-naturedly spoofs stereotypical country music lyrics. Prine refused to take a songwriter's credit and the tune went to Goodman, although Goodman bought Prine a jukebox as a gift from his publishing royalties. In 1975, Prine toured the U.S. and Canada with a full band featuring guitarist Arlen Roth. As of 2014, this has been Prine's only tour with a full band.

The 1979 album "Pink Cadillac" features two songs produced by Sun Records founder Sam Phillips, who by this time rarely did any studio work. The first song, "Saigon," is about a Vietnam vet traumatized by the war ("The static in my attic's gettin' ready to blow"). During the recording, one of the guitar amps blew up (which is evident on the album track). The other song Phillips produced is "How Lucky," about Prine's hometown. Prine continued writing and recording albums throughout the 1980s and formed his own record label, Oh Boy Records. His songs continued to be covered by other artists; the country supergroup The Highwaymen recorded "The Twentieth Century Is Almost Over," which had been written by Prine and Goodman. Steve Goodman died of leukemia in 1984 and Prine continues to perform many of Goodman's songs in concert to this day, such as "My Old Man." In 1991, Prine released the Grammy Award-winning "The Missing Years", his first collaboration with producer and Heartbreakers bassist Howie Epstein. The title song records Prine's humorous take on what Jesus did in the unrecorded years between his childhood and ministry.

"Lost Dogs And Mixed Blessings" was the 12th studio album by American folk singer John Prine, released in 1995. The cover artwork is by John Callahan. "Lost Dogs And Mixed Blessings" was produced by Tom Petty and the Heartbreakers bassist Howie Epstein, who produced Prine's 1991 Grammy Winning comeback album "The Missing Years". The album featured several songs Prine co-wrote with Nashville veteran Gary Nicholson and included contributions from guitarist Waddy Wachtel and Marianne Faithfull. It was recorded, as "The Missing Years" had been, at Huh Sound Theater, Los Angeles and Pacifique Recording Studios, North Hollywood - which was really Epstein’s house - and featured many of the same musicians that played on the previous album. However, Prine told the Fort Lauderdale Sun-Sentinel in 1995, “I didn’t want to try to come up with "The Missing Years" II. Sure, it came out big and shiny, but it won’t help if you put horns on it if the songs aren’t good." Prine also admitted that he and Epstein had come to the end of their working relationship: "We kinda overextended ourselves on Lost Dogs...I think we were pretty tired of each other. At the end, we shook hands and said, ‘OK, we did it.’”

"Lake Marie" is arguably the album's most popular track. The song was inspired in part by Prine's crumbling marriage and a series of grisly murders the singer remembered the Chicago news media having a field day with when he was a kid. The John Prine Shrine website quotes the singer discussing his inspiration for the song: "It's an actual place along the Illinois-Wisconsin border. There's an entire chain of lakes along there, small lakes, and I remember as a teenager growing up in Chicago, a lot of the teenagers would go to these lakes and in the summer time kind of get away from the city. Lake Marie was kind of just one that stuck out in my mind. About '59, '60, '61, I grew up in Maywood - it's a western suburb of Chicago, and we started hearing about murders that weren't related to the mob. You know, John Wayne Gacy was like, about two towns away from me and you just hear about it. The suburbs were kind of thought to be a pretty safe place at the time, and then some of these unexplained murders would show up every once in a while, where they'd find people in the woods somewhere. I just kind of took any one of them, not one in particular, and put it as if it was in a TV newscast. It was a sharp left turn to take in a song, but when I got done with it, I kind of felt like it's what the song needed right then." In 2005 Lloyd Sachs wrote that the song was "one of Prine’s masterpieces." In a 2009 interview with The Huffington Post, Bob Dylan commented, "If I had to pick one song of his, it might be 'Lake Marie.'"

"Ain't Hurtin' Nobody" was inspired by one of the singer's childhood trips to the beach and would be chosen to be Prine's second music video (the first having been "Picture Show"). The optimistic "New Train" seems to celebrate a new lease on life while "Humidity Built a Snowman" is a vague commentary on the impermanence of relationships. Several of the songs have a harder edge than many might expect from Prine, largely due to the presence of guitarist Waddy Wachtel, such as "Big Fat Love," which producer Howie Epstein referred to as “the Aerosmith number”, and the ominous "Quit Hollerin' At Me," which reveals Prine's frustration with consumer culture and the need to escape. Regarding the album's slick and occasionally "commercial-rock" sound, biographer Eddie Huffman speculates, “After the success of The Missing Years, Prine and Epstein may have thought they could do no wrong, and the cheesier songs sound like calculated attempts to get Prine on the radio.”

"Lost Dogs And Mixed Blessings" received favorable reviews upon release and was nominated for a Grammy award. Rolling Stone magazine commented, "Unlike virtually every other act in his age group, veteran singer/songwriter John Prine is doing the best work of his career right now." Writing for Allmusic, critic William Ruhlman wrote of the album "Fans of the early Prine may find that sound over-produced, but the songs never get lost, and with Prine's typically humorous, off-center view of the world... Music critic Robert Christgau wrote "Prine's waggish pathos and lip-smacking Americanese have been whetted by the divorce that keeps nosing in where it's not wanted. Biographer Eddie Huffman takes a dim view of the lyrics to several songs, such as “We Are the Lonely” and “Leave the Lights On,” the ladder of which was credited to Prine, Howie Epstein, Phil Parlapiano, and drummer Joe Romersa: “Prine seemed to be aiming at Cowboy Jack Clement-style whimsy, but it’s a wonder no one convinced him it wa s a terrible mistake to rhyme ‘telephoney’ with ‘Rice-A-Roni’ and ‘forty-two-inch Sony’ with ‘Twilight Zoney’.