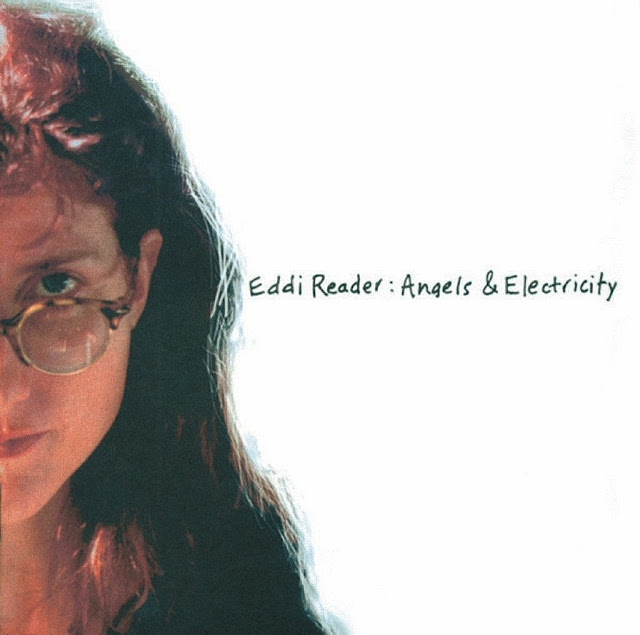 Sadenia 'Eddi' Reader was born in Glasgow, the daughter of a welder, and the eldest of seven children (her brother, Francis, is vocalist with the band The Trash Can Sinatras). She was nicknamed Edna by her parents. Living at first in the district of Anderston, Glasgow, in a tenement slum demolished in 1965, the young Reader family moved to a two-bedroomed flat in the estate of Arden, Glasgow. In 1976, due to overcrowding the family was re-housed 25 miles from Glasgow, in a council development in Irvine, North Ayrshire, however Eddi returned to Glasgow (where she lived with her grandmother) to finish her compulsory schooling. She began playing the guitar at the age of ten, and started her musical career busking, first in Glasgow's Sauchiehall Street, then in the early 1980s in London and around Europe (where she also worked with circus and performance artists). Back in Scotland, while finding factory work in Irvine and working part-time in Sirocco Recording Studio in Kilmarnock, she answered an advert in the music press and travelled to London to audition and join the punk band Gang of Four, who needed a backing singer for their appearance on British television music show The Old Grey Whistle Test and for their UK tour. This led to her first US tour with the band. After returning to the UK and leaving the band, she started working as a session vocalist in London, picking up work singing jingles for radio advertisements and singing with such acts as Eurythmics, The Waterboys, Billy MacKenzie, John Foxx and Alison Moyet.

In 1984, Eddi Reader returned to the UK from Paris, where she had been working as a singer for the composer Vladimir Cosma. Through her contact with the brass section session players The Kick Horns in London, she signed a contract with EMI, and recorded two singles with the disco group Outbar Squeek. Around the same time, she met and asked Mark E. Nevin, a guitarist and songwriter from the band Jane Aire and the Belvederes to write for her and they recorded two songs as The Academy of Fine Popular Music. They subsequently formed Fairground Attraction, together with Simon Edwards (guitarrón – a Mexican acoustic bass guitar) and Roy Dodds (drums & percussion). In 1988 the band signed to RCA/BMG records and released their first single, "Perfect", which became a UK number one, winning best single at the 1989 BRIT Awards. Their first album, "The First Of A Million Kisses", was also a success, reaching number two in the UK Albums Chart, and winning best album at the 1989 Brits. This success was short-lived, however. In November 1989, after a break, during which Reader had her first child, Charlie, with her French-Algerian partner Milou, arguments arose within the group, and Nevin abandoned a recording session for the second album, which eventually led to the splitting of the band. A makeshift second album, a collection of B-sides and live tracks, "Ay Fond Kiss", was rushed out the following year.

Reader returned to Scotland, but before she embarked on her solo career she took a temporary detour into acting. She played Jolene Jowett, a singer and accordionist, in John Byrne's Your Cheatin' Heart, a comedy-drama series for BBC Television, set in the country music scene in Scotland. In 1993 Reader was the presenter of BBC Scotland's No Stilettos, a music performance programme recorded in Glasgow. Her other acting credits include playing the part of Joy 3 from the Michael Boyd (artistic director of the Royal Shakespeare Company) production of Janice Galloway's The Trick Is to Keep Breathing. This was a BBC Radio 4 production in 1996 and also a Tron Theatre production the same year. Returning to London, Reader worked on new material with a backing band calling itself The Patron Saints of Imperfection (made up of Roy Dodds, Neill and Calum MacColl, and Phil Steriopoulos). This became her first solo album, recorded for RCA Records: 1992's Mirmama. She met Geoff Travis who signed her to Warner Brothers subsidiary label, Blanco Y Negro, The managing director Rob Dickens executively produced her second solo album "Eddi Reader" (1994), which won her the "Best female singer" BRIT Award that year, followed by "Candyfloss And Medicine" (1996), and "Angels & Electricity" (1998).

She parted from Warner Brothers and continued her work on Geoff Travis' Rough Trade label when she recorded "Simple Soul" (2001) and "Driftwood" (2002) - a "homegrown" release of songs recorded during the Simple Soul sessions. During this time, Reader also recorded the song "Ocean Love" for the soundtrack of the animated Danish film Help! I'm a Fish (2001). Reader also contributed vocals to one of Big Country's final singles before Stuart Adamson's death, "Fragile Thing". Reader continued to tour (England, Scotland, Japan, Australia, Spain, the United States, and Ireland). In 2003, she recorded her album of material by Robert Burns, with the Royal Scottish National Orchestra, leading to good reviews and an international resurgence in interest in Scotland's "bard".In 2004, Reader sang at the re-opening of the new Scottish Parliament building, where she was presented to Queen Elizabeth II. She has described the experience: "I was honoured to sing at the opening of the parliament although I almost didn’t ge t to. I wanted to sing "Auld Lang Syne" as I thought that would have been perfect for the politicians with everyone shaking hands but they wanted me to sing it in 'F’ key and that wasn't the key for me so I told them I wasn't doing it. It was only at the last minute that I eventually agreed."

She spent April 2006 touring Australia with Boo Hewerdine and Alan Kelly, following the release of St Clare's Night Out: Live at The Basement, with Australian acts such as David Hosking invited to open the concerts. Reader's eighth studio album, "Peacetime", was released in 2007 on the Rough Trade record label. Produced by fellow Scottish folk musician, John McCusker, the album features a few Burns composed songs, alongside original material with long-time collaborator Boo Hewerdine and The Trash Can Sinatras' John Douglas. In spring 2008, Reader was a special guest at the Hotel Cafe Tour hosted by Tom McRae. In 2009, she performed in period-drama Me and Orson Welles, directed by Richard Linklater and starring Zac Efron, Christian McKay and Claire Danes. Reader performed re-arranged 1930s standards, with Jools Holland, with whom she had previously collaborated on the single "Waiting Game". To commemorate the 250th anniversary of Robert Burns' birth, Reader released "The Songs Of Robert Burns Deluxe Edition" in January 2009. The new release brought together the original Burns album with seven additional songs, two from the original 2003 sessions ("Green Grow the Rashes O", "Of A' the Airts"), three from 2007's Peacetime ("Ye banks and Braes", "Aye Waukin O" and "Leezie Lindsay") the unreleased "Dainty Davie", also from that session, and a brand new recording, "Comin' Thro the Rye/Dram Behind the Curtain". The new album was promoted, like the original release, with two sold-out shows at the annual Celtic Connections festival in Glasgow.

In 2009 Reader released her ninth studio album, "Love is the Way", which was self-produced. In a special arrangement with record label Rough Trade she sold an exclusive, pre-released and minimally-packaged version of the disc on her 19-date autumn 2008 UK tour. In early 2010, Reader appeared on the Irish language album "Ceol '10 Súil Siar", singing an Irish language version of the Fairground Attraction song "Perfect" called "Foirfe". In December she released a live album on her own label and sold exclusively via her online store, Live in Japan. Recorded from the sound desk at her Japan shows in September 2009, it was mastered and mixed by Mark Freegard who had worked on the 2009 album "Love is the Way". In 2013, Reader married John Douglas, a songwriter and member of The Trashcan Sinatras. Reader is writing a book for publication about her great-uncle Seamus (or James) Reader, who was head of the Scottish Brigade of the Irish Republican Brotherhood, when the Irish War of Independence broke out in 1919, later becoming a founder of the abortive Scottish Republican Army, which attempted to replicate the Irish struggle in Scotland between the wars. On Facebook, she posted that he: "was in command of 4,000 Scots involved in the Irish Rising build-up and the Irish war against The British state. In telling the story I felt my ancestor was passing the baton to me to tell the truthful story of this time". Reader has been a prominent advocate for the Yes Scotland movement, campaigning for a Yes vote in the referendum for Scottish independence from the United Kingdom. Her outspoken appearance on the British TV programme Question Time resulted in her being publicly criticised, with one viewer threatening on Twitter to cut her tongue out.

Reader has said she is "an egalitarian who believes in the autonomy of small nations, it's unconscionable that those who call people 'nationalists' for wanting their country to manage its own wealth, do not recognise the 'nationalistic' choice of supporting a 'British nation'". Reader has claimed that, in reprisal for her advocacy for Scottish independence, Lord David Steel said, in a debate on Scottish independence in the House of Lords that Reader's work on Robert Burns was "murdering Burns' simple melodies". Reader also claims the newspaper The Scotsman, in reprisal for Reader choosing to advocate a yes vote, had published a story mischaracterising her political views and misrepresenting her great-uncle as a  Nazi and leader in the Irish Republican Army, stating: "there’s people out there in Scotland, especially in the Press, and especially at The Scotsman - which is a very wrong name for that paper, because they don’t believe in Scotland at all; they believe in London management - who believe that Scots do not deserve the vote. I don’t want to be in that team." She has issued a formal appeal to the Press Complaints Commission, alleging that: "The article was trying to portray all people wanting to have Scots running Scotland and independence voters as having links with the early Fascists. The journalist scrapped around and tried to attach my great-uncle, who supported independence, to a 'Nazi' group and a terrorist organisation, creating hateful responses and threats to my family."