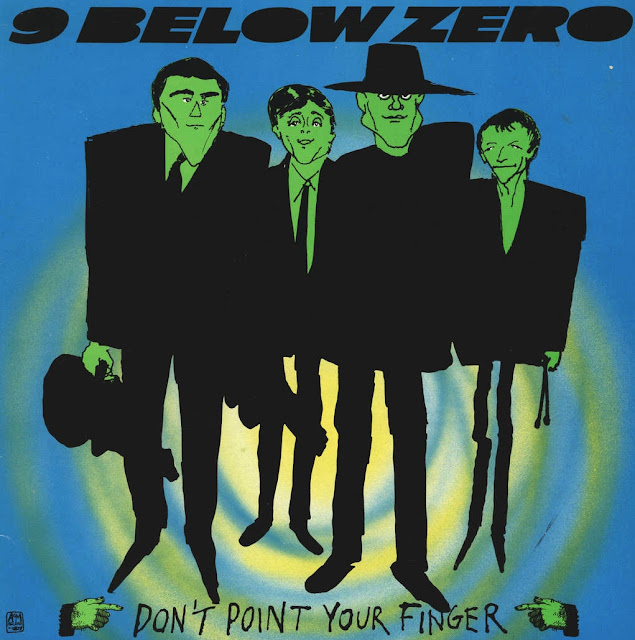 Nine Below Zero are an English blues band, who have a cult following throughout Europe, and were most popular during the period 1980 - 1982. The band was originally formed in South London in 1977, by guitarist and lead vocalist Dennis Greaves. Taking bassist Peter Clark with him, they recruited Kenny Bradley on drums, and vocalist and harmonica player Mark Feltham. They originally called themselves "Stan's Blues Band", and for two years built up a local following in London clubs. In 1979, while playing at The Thomas A'Beckett pub in the Old Kent Road they accepted an offer from former musician Mickey Modern to manage them, and it was he who persuaded them to change the band's name to something sharper. Greaves chose Nine Below Zero after the Sonny Boy Williamson II song. At that time Modern was a musician signed to A&M Records; after producing the band's demos he persuaded A&M to give him a record label with which to launch this band's career. Modern named the label M&L Records.

Under Modern's creative direction and production, the band went full-time, and in 1980 released their first album, Live At The Marquee, which was recorded on 16 June 1980. Bradley on drums was replaced by Stix Burkey. By the end of that year they were one of the most popular club attractions in London, pulling in audiences from other genres, particularly the new wave of British heavy metal, attracted by their high-energy fast tempo sound. They headlined at the Hammersmith Odeon and featured respected bluesman Alexis Korner, a long-time champion of new electric blues talent. In 1981, they released second album, Don't Point Your Finger, produced by Glyn Johns. Johns complained the bass was too basic for the new songs, so taking his advice the band subsequently replaced bass player Clark with Brian Bethell. There was a period when Nine Below Zero appeared on television almost weekly. They appeared on The Chris Tarrant Show, South Bank Show, O.T.T., the Old Grey Whistle Test, and the BBC comedy seriesThe Young Ones performing "11+11" on the first episode ("Demolition"). The band supported The Kinks and The Who on a tour.Don't Point Your Finger climbed to number 56 on the UK Albums Chart.

Their third album, Third Degree, contained "11+11", written by Greaves and Modern. The album was their highest placing appearance on the UK Albums Chart, spending six weeks in the chart and reaching number 38. Nevertheless, the band decided to split, although Bethell later had some success with The Blow Monkeys whilst Feltham went into session work, most notably for Rory Gallagher. Modern often put the idea to reform Nine Below Zero to Arnold but the latter was managing The Truth and considered Nine Below Zero as a move backward. However, with IRS Records interest in The Truth wavering in 1990 Modern persuaded Feltham and Greaves to reunite for a tenth anniversary concert. Modern also persuaded Arnold who now worked at Harvey Goldsmith Ents to promote the band at the Town and Country Club, which they did to a sell-out success. Suitably encouraged, they decided to stay together, with Gerry McAvoy and Brendan O'Neill (ex-Rory Gallagher's band) added on bass and drums. In 1992, Feltham left due to musical differences and was replaced by the session harp-player, Alan Glen. Feltham subsequently returned in 2001 and the band have continued to tour and record, still popular due to having developed a cult following. In 1995 Billy Boy Miskimmin was recruited on Harmonica.

In the mid-90s Nine Below Zero appeared at the Salle des Fetes, St. Jean de la Ruelle, Loiret, France. A successful gig that encouraged the Fabulous Thunderbirds to emulate them some months later. In 2005, their track "Go Girl" was included in the Of Hands and Hearts: Music for the Tsunami Disaster Fund compilation album. In 2007, Nine Below Zero performed two acoustic concerts, producing the DVD Bring It On Home, including a live CD. Blues guitarist Gary Moore joined the band on stage to promote the DVD. In August 2008, Nine Below Zero appeared at the Rhythm Festival in Bedfordshire and later opened for Chuck Berry at The 100 Club. In 2009, the band started working towards a show to celebrate the 30th anniversary of the release of their debut album, Live at the Marquee.

A chance meeting with Glenn Tilbrook from Squeeze resulted in an offer to record a new album that Greaves and Feltham had been writing all year. The offer was gladly accepted and the band went into 45 RPM studios in London to record the highly acclaimed and self-penned It's Never Too Late - their first collection of new songs since Refrigerator. European tours followed and Jools Holland and Paul Jones asked the band to guest on their shows. With the critical acclaim of It's Never Too Late, they were approached by Glenn Tillbrook again in 2011, this time to make a new record together under the name of The Co-operative. All was finished in July 2011 and one track, the Beatles song "You Never Give Me Your Money" was used on a Mojo magazine special celebrating the 40-year anniversary of the release of the Beatles album Abbey Road. The band played a few dates with Tilbrook as a rehearsal for a mini tour in 2012.

The end of 2011 saw Gerry McAvoy play his last show for Nine Below Zero and pursue a new solo career. His band is called Band of Friends and does regular shows each year at Ballyshannon in the memorial honoring Rory Gallagher and across UK and Europe. 2012 saw the return of Brian Bethell who played on Third Degree. The new lineup started performing in January with shows in Germany, Switzerland and Austria, as the band enter their 35th year. Following on from 2012's remastered re-release of Nine Below Zero’s live debut Live at the Marquee came a double installment; remastered editions of the first two studio albums Don't Point Your Finger and Third Degree, each with a separate disc of bonus material, was released on 24 February 2014 through Universal Music. A nationwide month-long 22-date tour in support of The Stranglers began on 27 February 2014. The band then undertook a 35th Anniversary tour in Autumn 2014. The second half of 2016 saw the release of the band`s first "big band" album, this new line made their live debut at Glastonbury Festival in June after which the big band toured extensively through the autumn and beyond.