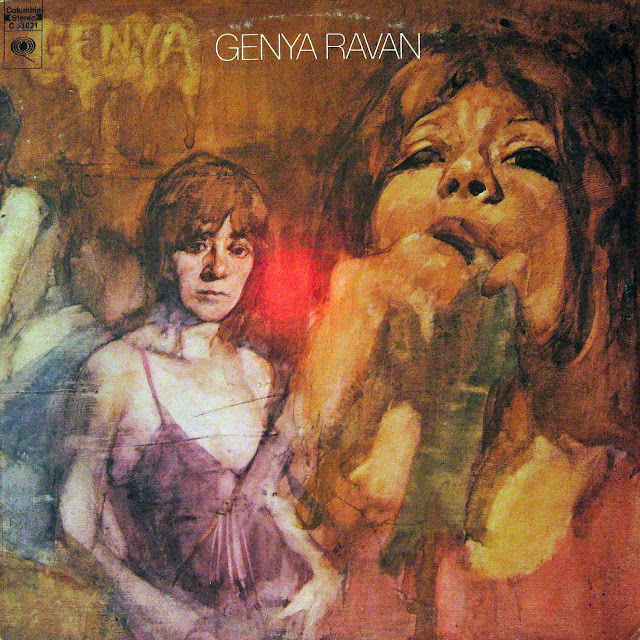 Genya Ravan is an important rock & roll personality and influential vocalist and record producer, born Genya Zelkowitz on April 19, 1945, in Lodz, Poland. Her mom later changed her name to Goldie Zelkowitz, Ravan taking her birth name back when she formed the band Ten Wheel Drive. When her parents left Poland, they went into a Russian camp. The singer kindly gave personal details of her youth to AMG on April 4, 2002: "We lost everyone. I never had an aunt or an uncle, I had two brothers, they died. I never met my grandparents, it was me and my sister and my mom and dad. They came from big families and saw all of them die. We escaped to the U.S. via a ship. We were DPs and went straight to Ellis Island."

Young Goldie Zelkowitz never knew she could sing until in her late teens "then I picked up alto sax, drums, and harmonica." In the summer of 1962, she asked to sing with the Escorts (not Felix Cavaliere's band from Syracuse University nor the '50s group or U.K. band of the same name) who were performing at the Lollipop Lounge in Brooklyn, NY. She remembers it was the summer because: "I had pants that showed my belly button, they could not get their eyes off it." Soon, she was rehearsing with the band and became the first girlfriend of Richard Perry, bass vocalist in the group and the man who would go on to produce Ringo Starr, Carly Simon, Leo Sayer, the Pointer Sisters, and so many others. The band recorded and released a few singles on Coral Records in 1962 and 1963: "Somewhere" b/w "Submarine Race Watching," "I Can't Be Free" b/w "One Hand, One Heart," and "Something Has Changed Him" b/w "Back Home Again."

After she left the Escorts, Zelkowitz formed Goldie & the Gingerbreads, an original all-female band that was only the first of many firsts for Zelkowitz. All girls in a man's music world was as daunting a task as a woman trying to become president of the United States. Petula Clark, Lulu, Cilla Black, Skeeter Davis, and Kitty Wells simply did not have a crew of women backing them up. Where the Go-Go's became a bit of a novelty years later, the people who came before that hit '80s band, Goldie & the Gingerbreads, Fanny, and later, Isis, all had a harder edge and would have done more for the cause's credibility had they had the hit singles to go along with their critical acclaim.

Genya Ravan released an album a year starting in 1969 with Ten Wheel Drive's Construction #1 on Polydor, up to the 1974 release of Goldie Zelkowitz on Janus, but created her most popular recordings on 20th Century Fox in 1978 and 1979 when she released the self-produced ...And I Mean It / Urban Desire one-two punch. Genya Ravan, her first solo disc which Columbia released after she left Ten Wheel Drive, was the catalyst for Ravan producing herself. Perhaps the most shocking thing about the record is that it is the only one she recorded for Columbia, a place that seemed like the perfect home for a woman with so many talents. Clive Davis originally wanted Richard Perry to produce, and it wasn't the fact that he was Ravan's first boyfriend that the idea was nixed, his pop work with Carly Simon was not what this artist is about. Larry Fallon former partner of producer Jimmy Miller and the guy behind "Brandy (You're a Fine Girl)"for The Looking Glass (he had also put strings on an unreleased version of "Wild Horses" for Jimmy Miller and the Rolling Stones) was brought in, but "Brandy" was more pop than "You're So Vain" if you think about it.

To feel comfortable, Ravan asked for, and got, her original partners in Ten Wheel Drive, Aram Schefrin, and Michael Zager, and with the band Baby behind her, Goldie Zelkowitz made the first album of her career beyond Goldie & the Gingerbreads and Ten Wheel Drive. It is a pure document of her transition. This is the shift between the sounds of Ten Wheel Drive and what would follow on 1973's They Love Me, They Love Me Not and 1974's Goldie Zelkowitz. She takes Rod Stewart and the Faces superb and little recognized "Flying" and makes it her own, a tune she would continue to perform live in concert. Stephen Stills' "Sit Yourself Down" gets a total reworking, just as Gabriel Mekler would revamp Whipping Post with her in 1974, when Ten Wheel Drive was re-forming with Annie Sutton. It is an amazing thread of events, with players from both the Rolling Stones and Janis Joplin filtering through her recorded work, and where this album could have been Columbia Records replacing Janis Joplin with Genya Ravan, the singer opted to take her music into a realm where Diane Schuur would feel at home, rock influenced by jazz rather than high-powered blues rock. Indeed, the final track on side one, "Takuta Kalaba," is blended into "Turn on Your Love Lights," a song Janis Joplin did with the Grateful Dead if memory serves on one of the live tapes of theirs that has circulated over the years, so there was this thread, though the result is 180 degrees from where Joplin took it. Genya Ravan did not want to fill the Janis Joplin void for Mr. Davis - she wanted to be herself.

Clive told her, "You are either a rock singer or you're a jazz singer, but you cannot do both," and maybe for short-term marketing he had a point, but for longevity and vision, the Larry Fallon-produced "I'm in the Mood For Love" is exquisite. Fallon had come from a jazz band with Jimmy Miller, who coincidentally produced Genya Ravan's next album for his production company, released on ABC Dunhill. James Moody's saxophone solo is thrilling, and a real touch of class. The cabaret atmosphere seguing into the African drum sound of Michael Olatunji and his "Takuta Kalaba," which was released as a single in Europe. Brilliant material which would certainly stifle the Janis Joplin comparisons. The soulful rendition of Leonard Cohen's "Bird on a Wire" was tracked long before Cohen was considered chic. Columbia released "What Kind of Man Are You" from this album on a 45 rpm with the non-LP A side of "Morning Glory," written by Michael Holmes, and produced by he and Dixon Van Winkle, making for five producers during these sessions!. The single was the idea of Clive Davis, and it is beautiful, the style of music that Bette Midler was having success with at this point in time. Midler eventually covered Genya Ravan's "Stay With Me" for The Rose film and soundtrack, bringing things full circle. Genya Ravan is an album brimming with this creative woman's personality, talent, and amazing vocal prowess. "Morning Glory" should eventually find itself on a Sony/Legacy re-release of Genya Ravan, important music that is continuously contemporary because of the long-range vision of the artist.