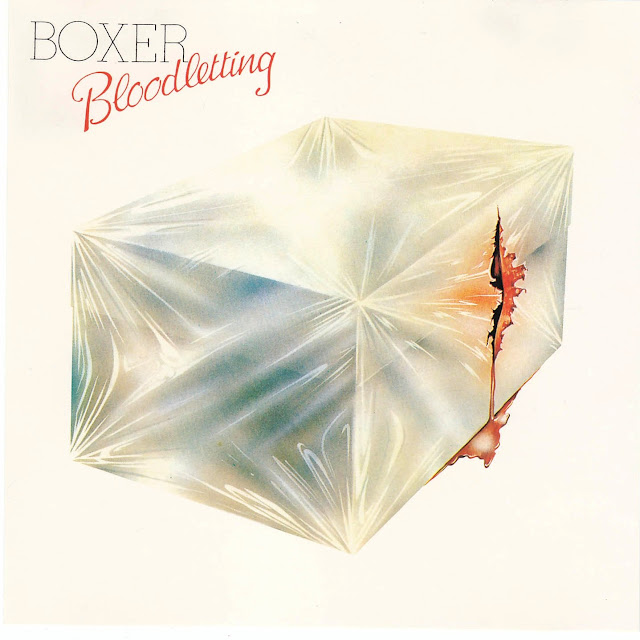 Approximately two years after the breakup of Patto, Mike Patto and Ollie Halsall reunited in 1975 to form Boxer along with Keith Ellis on bass (Van Der Graaf Generator, Juicy Lucy, Spooky Tooth, et al.) and Tony Newman on drums (Sounds Inc., Jeff Beck Group, Kevin Ayers, et al.). Keith and Mike were in Spooky Tooth together. Mike left that band after a year and began working as a promotions man for Good Ear Records, owned by Mike's manager, Nigel Thomas. Nigel would also become Boxer's manager and give them their name. Ollie and Tony were playing together touring with Kevin Ayers, and when the touring stopped they got Mike to quit the record biz and form a new band. This time the music Mike and Ollie brought to the table was straight-ahead rock that reflected little of their Patto past, except for possibly some of the songs on the unreleased "Monkey's Bum" album.

The band released it's first album, "Below The Belt", in 1975.  "All The Time In The World" was released as a single with a great non-LP B-side titled "Don't Wait".  They recorded a great second album called "Bloodletting" that would for some reason not be released until 1979. Very little of the Boxer story seems to be documented, especially about the breakup of the original lineup.  Sometime in late 1976, Halsall is said to have quit the band. But somehow Boxer's management ended up in possession of the band's equipment, including Ollie's guitars (as late as 1981, Ollie still didn't own an electric guitar of his own). This is just hearsay, but the story is that the band was very deep in debt with Nigel Thomas, and he held on to all their equipment. Then Nigel's company was liquidated, and Ollie's guitars were likely auctioned off by the official receivers. Where is Ollie's white Gibson Custom SG now?

Mike put together a new lineup of the band to record one more Boxer album in 1977 called "Absolutely". The new lineup band consisted of Mike, Chris Stainton on keyboards, Tim Bogert on bass and vocals, Adrian Fisher on guitar, and Eddie Tuduri on drums. The album is not as raw and rocking as the first albums, but there are some fine moments of musicianship and songwriting on this album. The Randy Newman-esque song "Everybody's A Star" was released as a single. This album would be Mike's final release before passing away in 1979 with lymphatic leukemia (cancer of lymph glands). They did some BBC sessions, and their tours, at least for the original lineup, were critically acclaimed. Their first LP cover did get them some attention through controversy. Many seem to remember their first album cover, even if they never did heard the contents. But, as is typical of the Patto story, Boxer did not achieve a great deal of attention or success.

"Bloodletting" was recorded in 1976, but for some reason was not released to the general public until 1979. Strange, because it is a great album, despite the fact that half of the album's songs are cover versions and Ollie has no writing credits. Every track is strong, and the band has a fuller sounding production than on the "Below The Belt" debut. All of the original compositions are credited solely to Mike, and the "The Blizzard", "Rich Man's Daughter", and "Big City Fever" are perhaps some of the catchiest tunes he wrote on his own. He redid "Rich Man's Daughter" for the 1977 Boxer album, "Absolutely". "Bloodletting" includes four great cover tunes. "Hey Bulldog" rocks hard and includes some great guitar.  "Dinah-Low" is a fantastic version of the Terry Stamp/Jim Avery song from Terry's 1975 "Fatsticks" album, which both Ollie and Tony Newman played on. Perhaps the star track on the album, though, is the live version of Leonard Cohen's "Teachers". It is a smoking performance by the band, which features a bit of Ollie jamming alone towards the end.

Unlike the first album, other musicians guested on "Bloodletting". Chris Stainton was acknowledged in large print on the album cover for his keyboards. Boz Burrell (King Crimson, Alexis Korner, Bad Company), Bobby Tench (Jeff Beck Group), and Tim Hinkley (Bo Street Runners, Jody Grind, Alexis Korner) all played in Chapman Whitney's Streetwalkers and were involved in the Hinkley's Heroes jam band, which Mike Patto was also involved with. The three are only listed in small print on the record label, so their contributions to "Bloodletting" are unclear - likely just backing vocals and minor instrumentation. Supposedly, a number of promotional copies were pressed in 1976. Expect to pay a lot for one of these rare pressings - if they actually exist and you can find one. However, there seems to be a general misconception that this album was never released to the public, and some record dealers are asking as much as $100 for the 1979 stock copies.  That seems a bit inflated. Near mint copies of the 1979 pressing can usually be obtained from a knowledgeable dealers for $20-$30. The album was later reissued on CD in 1997 by Virgin Records (Cat. # CDV2073). It was again reissued on CD in 2012 by Esoteric Recordings (ECLEC2342), including expanded liner notes.