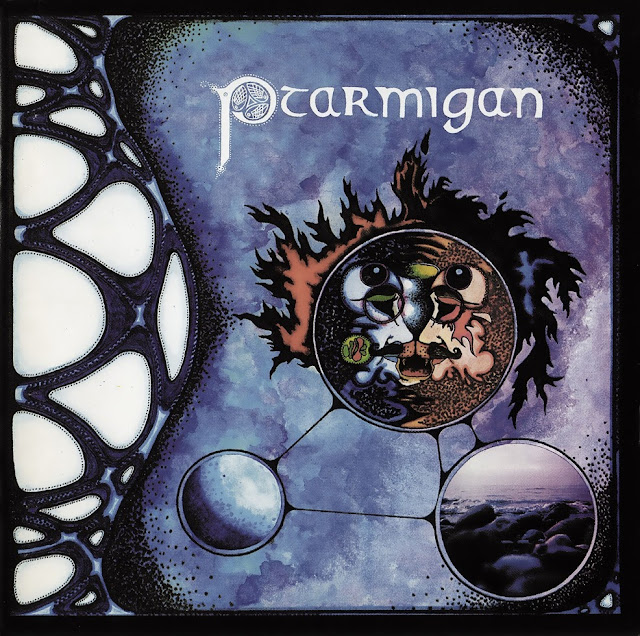 Ptarmigan was formed in 1970 when Michael Bieling introduced guitarist James Lithgow to vocalist / recorder player, Glen Dias. They began writing songs with Bieling accompanying on congas & soon added Dennis Lelonde on alto sax, piano & vocals; Monte Nordstrom on 12 string guitar & vocals with a second percussionist, Shawn Mullins. The sextet performed on Vancouver lsland & eventually came to the attention of the renowned flautist Paul Horn who had moved to Victoria, BC to escape the rigours of life in Los Angeles. He was impressed with the group's unorthodox style & encouraged the band to stay in touch. When the group fragmented with Lithgow & Bieling departing Peter Wheeler, an American percussionist, joined the band. Eventually Lelonde dropped out of the line-up & when plans were made to travel across Canada, the ensemble was reduced to the duo of Dias & Nordstrom who purchased train tickets to Toronto & set out on the road. The first stop was Winnipeg & their first dates at the Ting Tea Room.

They began writing new material immediately, developing harmony structures & establishing their eerie west coast sound. After two months on the Winnipeg scene the duo continued by train to an extended stay with the Macauley family in Scarborough. They auditioned unsuccessfully at Grumble's & The Riverboat in Toronto & ended up spending Halloween collecting candy for the Children's Hospital. They performed at The Fiddler's Green appearing with Leon Redbone & the Downchild Blues Band. A visit to Hamilton turned into several weeks followed by a return trip to Winnipeg & the Ting, where they performed for Christmas & New Years, both memorable if strange occasions. A late night jam with members of Lighthouse occurred during this time. A van trip across Northern Ontario ensued in January 1972 with Gary McKeehan, an independent CBC actor/producer & also a manager for Perth County Conspiracy.

They eventually ended up at McKeehan's rural home (near Stratford, where they visited at the Black Swan). A trip to Chicago was attempted but the two young men were turned back at Detroit due to their long hair, odd luggage & low supply of funds. They returned to Mckeehan's & plans were made to go to Ottawa following up on an invitation made by Rob Putt, (an audio technician they had met in Winnipeg). They continued on to Toronto by bus & were now without sufficient funds to carry on. After a night at the YMCA, one bus ticket for Ottawa was purchased & the 2 musicians flipped a coin to determine who would take the instruments on the bus & who would hitchhike the 500 miles through the sub-zero blizzard.

Glen lost the toss & watched as Monte rode out on the Greyhound to Ottawa, 10 hours away. Monte was met in Ottawa by Rob Putt & had already secured a gig at a hippy cafeteria called The Kitchen Cinq, when Glen arrived some 5 hours later looking like the abominable snowman in his battered fur coat. Ottawa turned out to be an excellent environment for Ptarmigan. After a stay with Rob's family the duo moved into The Pestalozzi which was described as a 21 story vertical commune, fuil of radicals, artists, freaks & university types who congregated downstairs in the Kitchen Cinq listening to acoustic music & rattling their cutlery. An audition was arranged at Le Hibou and the duo was hired to open for Lenny Breau (who happened to be Monte's guitar idol and became one of his major influences).

The duo opened two shows a night for the week and Monte's 18th birthday was celebrated in The Ting Tea Room. The first stop was Winnipeg & their first dates at the Ting Tea Room. It took that amount of time to find a label willing to release unusual project. Finally Paul leased the recording to Columbia of Canada who manufactured & released the Lp (& single "Go Dancing" b/w "Vancouver") in early 1974. Between the time of the recording & the release of the Ptarmigan LP Glen & Monte had not been very active musically. In fact the partnership had effectively been ended. The conflict of personality which had been there from the onset came to the fore & waiting a year for the release did not ease the tension. Faced with promoting the project they attempted to put their differences aside.

They performed for a week opening for the Paul Horn Quintet at the Egress in Vancouver & did a series of small shows on Vancouver Island. Monte asked a talented friend, David Aston to join the group on bass guitar & they rehearsed. He was enthusiastic that they were starting to co-write. A drummer was added & a premiere concert was arranged by Horn. The show went on but the drummer really wasn't suitable for the band so it was agreed that a replacement should be found. More rehearsals took place. A few weeks later David was tragically killed in a car accident & a devastated Monte walked away from the Ptarmigan project for the last time. Glen Dias went on to develop a career as an actor / singer in musical theatre while Monte continued to write & record solo material with a variety of musicians including former ptarmigans Michael Bieling and James Lithgow.

After Ptarmigan folded, Glen Dias travelled to San Francisco, Tucson & New Orleans, making club appearances & performing as a busker. Relocating to Toronto, he pursued a career in musical theatre & landed roles in various productions including Jesus Christ Superstar, Les Miserables & Napoleon. He has also appeared as a studio musician on recordings by Kathy Stack, Roger Lee, Ray Montford, Angels For Tea, Geoff Bennett, Zombo Zombo, Mardi Jayde and Ani Coutino, among others. In 1999 Glen Dias released his first solo CD entitled "Tip of the Iceberg", recorded with his band The Polarity Bears". (with a new version of "Go Dancing"). He also owns Elizagoth, a medieval store. Monte Nordstrom has recorded an onegoing series of eclectic albums for Groovedigger Records: Silhouette of Our lnsanity 1978; Voodoo Rage '80-83; Nothing More Better '89-92,self-titled '94; Sunday Healing Service '94; Northstream '96, Live at JBI '98, and Sou'Wester '99. Since 1980 he has supported himself by performing music & continues to be based on Vancouver Island. He also contributes a feature column to Cosmic Debris Musicians Magazine.