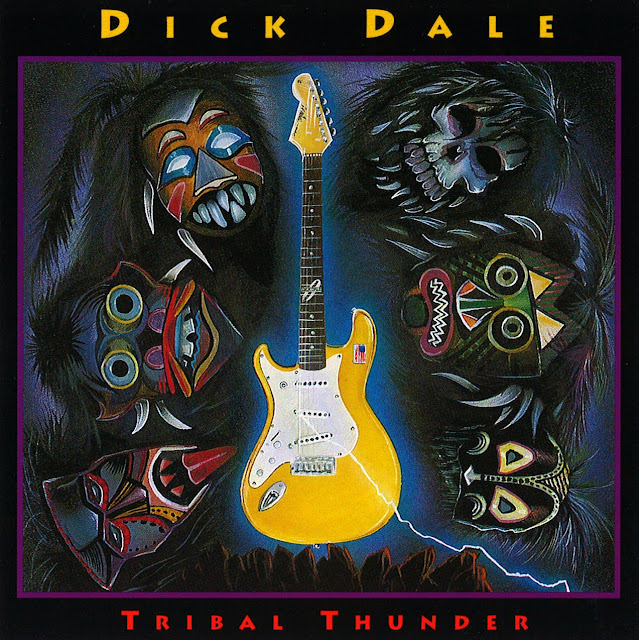 Dick Dale was born as Richard Anthony Mansour, in Boston, Massachusetts, on May 4, 1937. He is of Lebanese descent from his father and Polish-Belarusian descent from his mother. His parents farmed in Whitman, Massachusetts. Dale's family moved to Quincy, Massachusetts, which had a significant Arab immigrant community, when Dale was very young. He learned to play music, starting with piano when he was nine. Dale admired Hank Williams, he wanted to be a cowboy singer, so he bought a plastic ukulele for $6 and taught himself to play by reading an instruction book. The first song he played on the ukulele was "Tennessee Waltz". He then learned to play guitar, using a combination style incorporating both lead and rhythm aspects, so that the guitar filled the place of drums. He was raised in Quincy until he completed the eleventh grade at Quincy High School in 1954, when his father, a machinist, took a job in the Southern California aerospace industry. His parents drove the family across the country to live in El Segundo, California. Dale spent his senior year at and graduated from Washington Senior High School. It was in Southern California that he learned to surf at the age of 17. He soon learned to play the drums and the trumpet. Due to his Arab heritage, he also had a strong interest in Arabic music, which later played a major role in his development of surf rock music.

Among his early musical influences was his uncle. According to Dale, "My uncle taught me how to play the tarabaki, and I watched him play the oud. We used to play at the Maharjan [an annual Lebanese festival in Greater Boston] while relatives belly-danced." His early tarabaki drumming later influenced his guitar playing, particularly his rapid alternate picking technique. According to Dale, "It's the pulsation," stating that whether he is playing the guitar, trumpet, or piano, "they all have that drumming beat I learned by playing the tarabaki." Dale is credited as one of the first electric guitarists to employ fast scales in his playing. Dale was a surfer and wanted his music to reflect the sounds he heard in his mind while surfing. He was among the first guitarists to use reverb, which gave the guitar a "wet" sound that has become a staple of surf music. Dale's staccato picking, however, is his trademark. Being left-handed, he initially had to play a right-handed guitar, but then changed to a left handed model. However, he did so without restringing the guitar, leading him to effectively play the guitar upside-down (Hendrix, in contrast, restrung his guitar), often playing by reaching over the fretboard rather than wrapping his fingers up from underneath. Dale is also noted for playing his percussive, heavy bending style, using what most guitarists consider very heavy gauge strings (16p, 18p, 20p. 38w, 48w, 58w guitar string manufacturers do not make string sets for standard tuned electric guitars heavier than 13 to 56). His desire to create a certain sound led him to push the limits of equipment.

Leo Fender kept giving Dale amps and Dale kept blowing them up. Till one night Leo and his right hand man Freddy T. (Freddie Tavares) went down to the Rendezvous Ballroom on the Balboa Peninsula in Balboa, California and stood in the middle of four thousand screaming and dancing Dick Dale fans, and said to Freddy, I now know what Dick Dale is trying to tell me. They went to James B. Lansing loudspeaker company and explained that they wanted a fifteen inch loudspeaker built to their specifications. The unit became famous as the 15" JBL D130F model. It made the complete package for Dale to play through and was named the Single Showman Amp. When Dale plugged his Fender Stratocaster guitar into the new Showman Amp and loudspeaker cabinet, he was probably the first performer to jump from the volume scale of a smaller amplifier to levels most amplifiers and loudspeakers could not attain. That is when Dale became the "Father of Heavy Metal" as quoted from Guitar Player magazine. Dale broke through the electronic barrier limitations of that era. Eventually, his work with Leo Fender produced a distinctively fuzzy sound that had set the base of surf music.

During a six-month period that began July 1, 1961, Dale's performances at the Rendezvous Ballroom in Balboa are credited with the creation of the surf music phenomenon. Dale asked for and gained permission to use the 3,000 person capacity ballroom for surfer dances after overcrowding at a local ice cream parlor where he performed made him seek other venues. The Rendezvous ownership and the city of Newport Beach agreed to Dale's request on the condition that he prohibit alcohol sales and implement a dress code. Dale's events at the ballrooms, called "stomps," quickly became legendary, and the events routinely sold out. Paul Johnson, guitarist for the contemporary group The Bel-Airs, recalled the electric atmosphere of the shows: "I remember making the trek to the Rendezvous in the summer of '61 to see what all the fuss was about over Dick Dale. It was a powerful experience; his music was incredibly dynamic, louder and more sophisticated than The Belairs, and the energy between The Del-Tones and all of those surfers stomping on the hardwood floor in their sandals was extremely intense. The tone of Dale's guitar was bigger than any I had ever heard, and his blazing technique was something to behold."

"Let's Go Trippin'" is often regarded as the first surf rock song. This was followed by more locally released songs, including "Jungle Fever" and "Surf Beat" on his own Deltone label. His first full-length album was Surfers' Choice in 1962. The album was picked up by Capitol Records and distributed nationally, and Dale soon began appearing on The Ed Sullivan Show, and in films where he played his signature single "Misirlou". He later stated, "I still remember the first night we played it ("Misirlou"). I changed the tempo, and just started cranking on that mother. And...it was eerie. The people came rising up off the floor, and they were chanting and stomping. I guess that was the beginning of the surfer's stomp." His second album was named after his performing nickname, "King of the Surf Guitar". Dick Dale stated his two passions, Surfing and Guitar, by saying: "There was a tremendous amount of power I felt while surfing and that feeling of power was simply transferred into my guitar when I was playing surf music. The style of music I developed, to me at the time, was the feeling I got when I was out there on the waves. It was good rambling feeling I got when I was locked in a tube with the white water caving in over my head. I was trying to project the power of the ocean to the people. I couldn't get the feeling by singing, so the music took an instrumental form."

Dale and the Del-Tones performed both sides of his Capitol single, "Secret Surfin' Spot" / "Surfin' and Swingin'" in the popular 1963 movie, Beach Party, starring Frankie Avalon and Annette Funicello. This helped bring Dale, surf music, and surf culture to national prominence. He also appeared in the 1987 film, Back to the Beach, in which Avalon's character, reluctant to attend a Dick Dale concert, remarks to Funicello, "We can come back here in the year 2000 and see Dick!", a testimony to Dale's continued popularity and career longevity. Surf Rock's national popularity was somewhat brief, as the British Invasion began to overtake the American charts in 1964. Though he continued performing live, Dale was soon set back by rectal cancer. In the liner notes of Better Shred Than Dead: The Dick Dale Anthology, the thought, "Then you'll never hear surf music again," was Jimi Hendrix's reaction upon hearing that Dale had a possibly terminal case of colon cancer, intended to encourage his comrade to recuperate. Dale, in gratitude to his late friend, later covered "Third Stone from the Sun" as a tribute to Hendrix. Though he recovered, he retired from music for several years. In 1979, he almost lost a leg after being injured while swimming and a pollution-related infection made the mild injury much worse. As a result, Dale became an environmental activist and soon began performing again. He recorded a new album in 1986 and was nominated for a Grammy. In 1987 he appeared in the movie Back to the Beach, playing surf music and performing "Pipeline" with Stevie Ray Vaughan. In 1993, he recorded a guitar solo on the track "Should Have Known" on a vinyl single by a Southern California indie band, The Pagodas. The use of "Misirlou" in the 1994 Quentin Tarantino film Pulp Fiction gained him a new audience.

In 1995, he recorded a surf-rock version of Camille Saint-Saëns's "Aquarium" from The Carnival of the Animals for the musical score of the enclosed roller coaster, Space Mountain at Disneyland in Anaheim, California. In 1997, Dale appeared in the campy cult film An American Vampire Story, performing a rousing guitar solo on the beach with his son on drums. In 2002, Dale appeared in The True Meaning of Christmas Specials, playing several original songs for the program. The National Hockey League's Colorado Avalanche use Dale's song "Scalped" as their theme song. The Black Eyed Peas' song "Pump It" (from the 2005 album Monkey Business) heavily samples Dale's "Misirlou". "Misirlou" also features in the PlayStation 2/Xbox 360 video game, Guitar Hero II, as well as the Wii video game Rayman Raving Rabbids. In the feature film Space Jam, as Elmer Fudd and Yosemite Sam (in a parody of the Pulp Fiction characters Vincent Vega and Jules Winnfield) shoot out teeth from one of the Monstars, a clip from "Misirlou" plays. In 2009, Dale was inducted into the Musicians Hall of Fame and Museum in Nashville, Tennessee. Dale is also a 2011 inductee into the Surfing Walk of Fame in Huntington Beach, California, in the Surf Culture category. Dale has said that he has never used alcohol or other drugs and discourages their use by band members and road crew. Health is a priority for him. In 1972, he stopped eating red meat. He studied martial arts (Kenpo karate) for over 30 years. At age 80 (as of May 2017) he is still putting on physically energetic live shows. In early 2008, he experienced a recurrence of rectal cancer and finished a surgical, chemotherapy, and radiation treatment regimen.

In June 2009, Dale began a West Coast tour from Southern California to British Columbia, with approximately 20 concert dates. "Forever Came Calling" (or FCC) featured Dale's then-17-year-old son, Jimmie Dale on drums, who opened for him. He was scheduled to play the Australian One Great Night On Earth festival to raise funds to benefit those affected by the Black Saturday bushfires and other natural disasters. Dale continues to perform at venues across the U.S. into 2016 in order to pay for medical bills. In addition to Fender amplifiers, Dale is associated with the Fender Stratocaster guitar. Fender makes a signature model, the Dick Dale Custom Shop Stratocaster, fitted with "Custom Shop '54" pickups and intended to recreate the sound of the first Stratocaster. Dale used a reverb unit with the signal split between two Fender Dual Showman amps. As of 2010, Dale continued to play with his original reverb unit and Showman amps from the early 1960s, continuing his practice of stringing his left-handed guitar upside down. The unique features of this guitar include a toggle switch that bypasses the three position blade switch to activate neck and middle pickups only. Fender also makes an acoustic signature model, the Fender Kingman Dick Dale guitar, with an all mahogany body so there is no loss in sound. The guitar is a three quarter size guitar but sounds like a dreadnought in Dale's words.