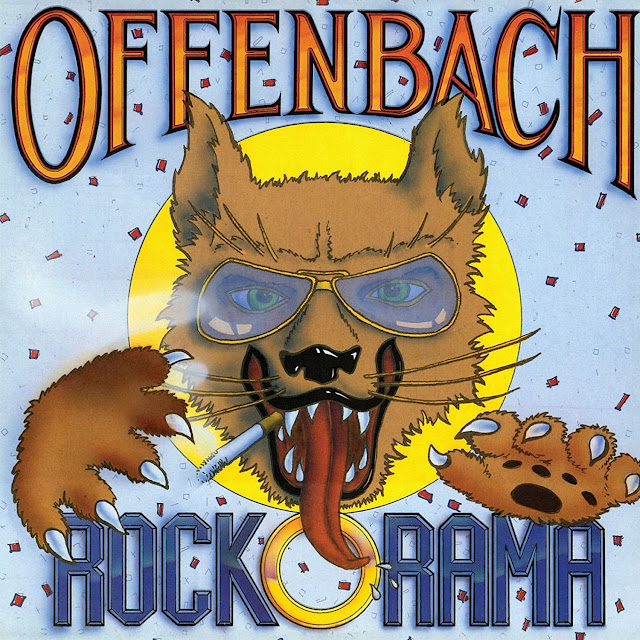 One of Québec’s most influential and popular rock bands, the progressive blues-rock group Offenbach, and more specifically lead singer and keyboardist Gerry Boulet, who emerged as the band’s creative force, have been credited with successfully adapting the French language to the hard rhythms of American rock. Offenbach won multiple Félix Awards and was the first Québec band to headline a concert at the Montréal Forum. Their best-known songs include “Mes blues passent pu dans porte,” “Ayoye,” “Promenade sur Mars,” “J’ai l’rock ‘n’ roll pis toé,” and “Câline de blues,” which was inducted into the Canadian Songwriters Hall of Fame in 2015. The group disbanded in 1985 and reunited in 1996, following Boulet’s death in 1990. Offenbach evolved from a succession of rock bands in the late 1960s, the last of which, Les Gants blancs, went through several names (7e Invention, Grandpa & Company, Offenbach Pop Opera, Offenbach Soap Opera) before settling in 1971 on Offenbach. The founding members were singer Gerry Boulet, guitarist Jean “Johnny” Gravel, singer and organist Pierre Harel, bass guitarist Michael Lamothe (son of Willie Lamothe) and drummer Denis Boulet (brother of Gerry).

Gerry Boulet and Johnny Gravel remained with Offenbach throughout its history. Denis Boulet left in 1972, replaced by Roger “Wezo” Belval. Harel departed in 1974, his keyboard responsibilities assumed by Gerry Boulet. Lamothe and Belval left in 1977 to join Harel in the band Corbeau (see Marjo), and thereafter personnel underwent frequent changes. Between 1977 and 1985, members included guitarists Jean Millaire, Doug McCaskill and John McGale, bassists Norman Kerr and Breen LeBoeuf, and drummers Pierre Lavoie, Bob Harrison and Pat Martel. Leboeuf also emerged as a featured singer. Inspired by British blues-rock bands such as Cream and Deep Purple, Offenbach’s repertoire initially comprised pop songs of the day, as well as blues-rock and original material. Its first LP, Offenbach Soap Opera (1972) included two songs in English, as well as the early classics “Faut que j'me pousse” and “Câline de blues,” which would come to define the band’s sound. Its second album, Saint-Chrone de néant (1973), was recorded live on 30 November 1972 during the Mass for the Dead at Montréal‘s Saint Joseph's Oratory.

Offenbach made its first trip to France in 1973 and was based in Paris from 1974 to 1975. Performances in France and Holland during 1974 were documented in the feature documentary Tnac and the live album of the same name, both released in 1975. The group also appeared in Switzerland and Belgium. On its return to Montréal in 1975, Offenbach moved to the forefront of Québec rock groups despite its reliance on US-styled blues and rock material, which set it apart from other bands in the province. Offenbach also recorded two LPs of songs in English: Never Too Tender (1976) and Rock Bottom (1980), and followed the first in 1976 with a tour across Canada. Its next LP in French, Offenbach (1977), included the songs “La voix que j'ai,” “Chu un rocker” and “Le blues me guette.” Traversion (1979) followed, with “Mes blues passent pu dans’ porte,” “Je chante comme un coyote,” “J'ai l'rock n' roll pis toé” and “Ayoye,” and brought the group its first Félix Award in 1979 for Rock Album of the Year.

In 1979, Offenbach toured Québec with the Vic Vogel Big Band; a recording of their concert at the Saint-Denis Theatre was issued as Offenbach en fusion, which won a Félix in 1980 for Rock Album of the Year. The band also received Félix Awards in 1980 for Group of the Year and Show of the Year, the latter honouring a concert on 3 April in which Offenbach became the first Québécois pop act ever to headline a show at the Montréal Forum. The band continued to tour in France, returning annually from 1979 to 1981. They played the Forum again in 1981 and, as part of a Québec tour with Plume Latraverse (documented by the live LP, À fond d'train), in 1983. Offenbach disbanded in 1985 after concerts at the Colisée in Québec City and, on 1 November, once again at the Forum, where the recording Le Dernier Show and the film Marci were made. Their final album, Rockorama (1985), was recorded in collaboration with Michel Rivard and yielded the hit single “Seulement qu’une aventure.”

In 2004, “Câline de blues” received a SOCAN Classic Award for having more than 25,000 radio plays. In 2005, the band released the album Nature, which featured acoustic covers of their greatest hits. The resulting tour included a concert with April Wine and Michel Pagliaro at Montréal’s Bell Centre, and several shows with the Vic Vogel band. L’Ultime, a limited edition box set consisting of two CDs and a DVD of the 1985 farewell show at the Forum, was released in 2007. That year, LeBoeuf left the band to join April Wine and was replaced by bassist Robby Bolduc. A reissue of Tnac, with five additional bonus tracks, was released for the first time on CD in 2011. Gerry, a biopic of Gerry Boulet’s life directed by Alain Desrochers and starring Mario Saint-Amand in a Jutra-nominated performance, was also released that year. As of 2013, the band, consisting of Gravel, McGale, Quessy, Landry (lead vocals, drums) and Bolduc, was touring regularly throughout Québec. Live à Montreux, a recording of the band’s performance at the Montreux Jazz Festival in 1980, was released in 2014. The band also occasionally featured Gerry Boulet’s son, Justin, as a singer. In 2014, he announced that he would be holding a memorial concert on 18 July 2015, the 25th anniversary of his father’s death.