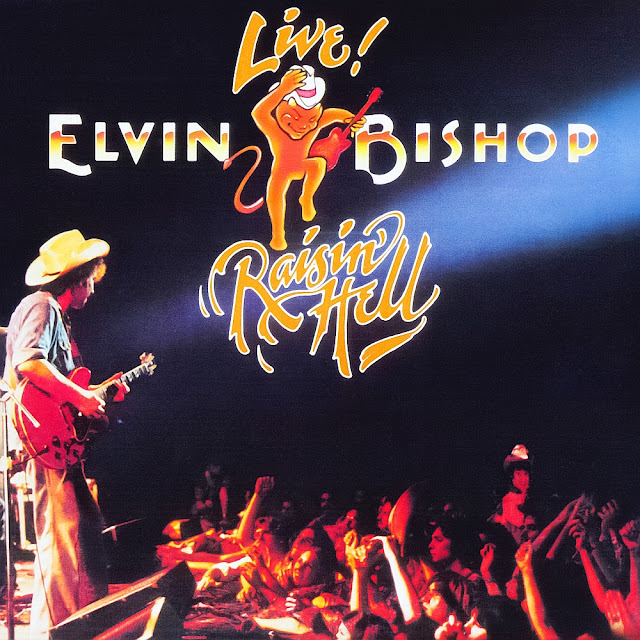 Growing up in the 1940s on a farm in Iowa with a loving but non-musical family, Elvin seldom heard music as a kid. “This was before TV,” Elvin says, “and on the radio you got a lot of Frank Sinatra and ‘How Much Is That Doggie In the Window’ type of stuff.” The family moved to Tulsa, Oklahoma, when Elvin was 10, in 1952. Tulsa was “totally segregated,” says Elvin, “I mean, hard core.” However, “the one thing they couldn’t segregate was the airwaves. When rock and roll started up, in the mid-’50s, Chuck Berry, Fats Domino and Little Richard showed up on white radio.” And then, late one night when Elvin was 14 or 15, the atmospheric conditions a little rough, Jimmy Reed’s harmonica came cutting through the static from WLAC in Nashville, and Elvin Bishop’s life was changed. The song was “Honest I Do.” “That piercing harp came through, cutting in like a knife, and I said, ‘Oh, man, that’s it.’ I found out that blues was where the good part of rock and roll was coming from.”

And about that time, he started trying to play guitar. “I wanted to play it from the beginning,” Elvin says. “I kept trying and then quitting it. Hurtin’ my fingers, playing those old pawn-shop guitars with the strings two inches off the fret board. Nobody I knew played.” But he kept after it. “Not being able to dance, and seeing how the musicians did with the girls, and loving the music, I finally stuck with it.” Hooked on the sounds emerging from the radio, Elvin had to find out where they were coming from and who was responsible. When he was awarded a National Merit Scholarship in 1959, he could have gone to pretty much any college he wanted, but chose The University Of Chicago, because that’s where the blues were. And so he landed in the middle of one of the richest and most vital scenes in blues history. “Any night of the week you could hear Muddy Waters, Little Walter, Howlin’ Wolf, Hound Dog Taylor, Otis Rush, Junior Wells, Buddy Guy, Magic Sam, Bobby King, Eddie King, Little Smokey, Big Smokey, and a whole ton of people you never heard of.”

His first week in Chicago, he came across Paul Butterfield, who was sitting on some steps drinking beer and playing blues on guitar. “We fell together right away,” says Elvin. “I was amazed to find other white guys into blues.” After playing with a lot of different people, including J.T. Brown, Hound Dog Taylor and Junior Wells, Elvin hooked up with Butterfield to form the legendary Paul Butterfield Blues Band, with bassist Jerome Arnold and drummer Sam Lay, who’d been Howlin’ Wolf’s rhythm section. Producer Paul Rothchild of Elektra Records encouraged them to add guitarist Michael Bloomfield. “I’d met Bloomfield before, in a pawn shop,” says Elvin, “when I was looking for guitars. We got to talking. He got a guitar out, started playing circles around the world.”

In 1965 the Butterfield band went into the studio and recorded The Paul Butterfield Blues Band album, which turned out to be a sea-change record for thousands of rock fans and musicians. An integrated band playing blues music in 1965 was unheard of. It introduced a lot of people to the blues, and to the musicians who had influenced the Butterfield band. After several more albums with Butterfield, including the pivotal genrebending East West, Bishop took off on his own. “I wanted to stretch out, see how far I could take it on my own,” says Elvin. Bishop had visited San Francisco with the Butterfield band during the Summer of Love in 1967. “I loved the people, the weather, and not having to watch my back all the time.” And like several other Chicago musicians he ended up moving to the Bay Area.

The 70’s saw Elvin hit the charts with solo tracks like “Travelin’ Shoes,” “Sure Feels Good” and what would become his biggest hit, “Fooled Around and Fell in Love,” with a powerful vocal by Mickey Thomas (later of Jefferson Starship). During the 1980’s, Elvin spent most of his time on the road, “entertaining the people and maybe having a little too much fun myself.” Later in the decade he hooked up with Alligator for a number of excellent albums that grew right out of his blues roots. "Live! Raisin' Hell' was recorded between March 1976 and February 1977 initially as a gig in Georgia, and subsequently at four shown in California, was released in late summer 1977, and became Bishop's second US Top 40 album, spending three months in the chart. He does not appear to have subsequently worried mainstream chart compilers, although he remained with Capricorn for two more albums, 1978's "Hog Heaven" on which Amos Garrett and Maria Muldaur guested, and 1979's "Best Of Elvin Bishop".