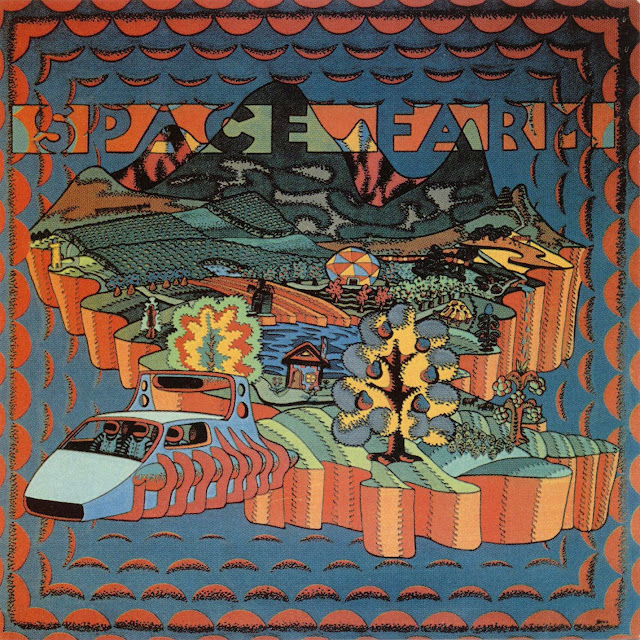 Although Harvey Mann and Glen Absolum were not alone in embracing the spiritual philosophy of Krishna consciousness which emerged in the early 1970s, they were among New Zealand’s most visible adherents to this path of spiritual enlightenment. So much so that in May 1972 the New Zealand Herald reported on the phenomenon of the chanting, shaven-head Krishnas on Auckland’s Queen St and noted among the devotees in this new cult were two members of “the Auckland pop group Space Farm”. “Spiritual food in Queen Street” was the Herald’s headline, which reported that pedestrians were baffled as the Krishnas gave away fruit and flowers. “Singing Maha Mantra - mind delivering - chants to the music of a guitar and small brass cymbals, the four Krishna devotees presented passersby with booklets, and specifically blessed fruit.” The purpose of the exchange was to interest people in God, Mr Richard Cook, “road manager for the Space Farm group”, told the Herald. “It is our philosophy to preach about God for the benefit of everyone.” The Krishna duo providing the music on Queen St were guitarist Mann and drummer Absolum. But Space Farm, by any stretch of the definition, was most certainly not a “pop group”.

Had the Herald - almost affectionately known then and for more than a decade after as “Granny Herald” - paid closer attention to what was happening just five minutes walk from its office, it would have been aware of the LSD-inspired cosmic rock of bands like Space Farm playing in Albert Park and the quad at the University of Auckland. Inspired by Hendrix, Indian music and many of the other ingredients in the psychedelic sonic stew of the time, Space Farm was making music which extended the contract of rock into something which reached towards the great beyond. Formed in 1971 by Mann and Absolum (formerly of The Underdogs) with bassist Billy Williams (from Whangarei's The Classic Affair), and briefly saxophonist Bob Gillett, the band did not last long and left just one self-titled album behind them (in two versions however). By early ’73 Mann and Absolum had fully embraced the Hare Krishna movement. Space Farm, which had created some of the most thrilling, exploratory live acid rock of the time, was no more. These days we are inclined to look askance at musicians like Mann and Absolum who, in just a few years, moved from the earthy John Mayall-inspired electric blues of The Underdogs into the acid rock of Space Farm and then on to Krishna-rock with their subsequent band Living Force. But that was in the nature of the period when new philosophies and ideas out of the East and America’s West Coast (the distinctive American Zen movement), primal therapy, macrobiotics and many and various “isms” (feminism the most prominent) all emerged in rapid succession.

If life was a journey, the late ’60s and early ’70s offered many different paths. Towards the end of Space Farm, Mann and Absolum were on theirs: shaven heads, vegetarianism and chanting the Krishna mantra replaced long hair, acid-eating and the rock‘n’roll lifestyle. Meanwhile, bassist Williams stuck with the secular and the pleasures of the flesh. “I still had too many earthly desires to take that spiritual path,” he told Sunday Star-Times writer Grant Smithies in September 2017 on the occasion of the vinyl reissue of Space Farm’s album. “I wanted to keep making loud rock music rather than sit around playing a sitar in a temple. So they went their way and I went mine.” In the liner notes to the 2017 reissue Wellington writer and critic Nick Bollinger observes, “It was a time of change and experimentation. Not just in music but also in society as young New Zealanders in growing numbers began to question the prevailing culture of rugby, racing and beer, the country’s involvement in foreign wars, and the values of earlier generations. “Some sought political change, others looked for alternatives in drugs and spiritual beliefs. For such seekers, Space Farm provided the ideal soundtrack.” Bollinger’s overview is broadly correct but what is also notable about that period of social and political change is just how little overt comment there was from musicians. About the conflict in Vietnam for example - in which New Zealand was represented by volunteers - there was a deafening silence from the counterculture musicians. It seemed everyone was too busy on their own personal trip.

Space Farm’s album represents that: the lyrics are about vague ideas of freedom, flying, gypsies, space, infinity, “forever today”, living for the moment. Bollinger’s essay quotes Mann in this regard: “All throughout history, music has been connected some way with freedom and a sort of feeling of liberation. I am most moved by music when it takes me away - ‘away’ being from the 9-to-5 sort of mundane consciousness, and the restrictions of the general mundane stuff that takes a lot of our time.” With the album’s original release came a poem by Glen Absolum (whose nickname was Glenny Pig) that describes an alternative, organic personal universe: “Do you like the busy city / Or does your love lie with the sun / Watching it rise in the morning / And knowing your life has just begun”. The original 1972 album notes were written by Tom McWilliams, the deputy editor of entertainment magazine Playdate, then in its last year. He wrote that Space Farm’s name “suggests music of infinite depth and reach. There are no boundaries in space and Space Farm is cultivating a far-out freedom. As Harvey Mann sings in the number ‘On the Loose’: ‘I am like a rolling stone of the sky’. “The lyrics of this album have thematic unity. They affirm ‘the grace of all things that are moving’ (‘Wheel’). The album is ‘about’ universal freedom, infinity and eternity. There is nothing freaky in such subjects, nor in the sound, which is powerful but melodic – strong and graceful.”

If the inconvenient realities of life were often ignored then it hardly mattered in Space Farm’s case: it was never about their words but the sheer power and inventiveness of the music borne out of the musicians’ backgrounds and diverse interests. In The Underdogs, guitarist Mann had such a formidable reputation as a player of technical expertise and emotional depth that - in a slightly desperate mimicking of the London graffiti which read “Clapton is God” - some here wrote “Mann is God” on walls. By the time of Space Farm however, the impact of Jimi Hendrix’s extraordinary style was much more evident. This was LSD-influenced improvised rock which evoked colours and sounds largely unfamiliar in our local musical landscape. Space Farm was, in the parlance of the period, “out there, maaan”. Although there wasn’t much acid around in the general population at the time, not even among students and creative types beyond the connected cognoscenti, Space Farm’s music tapped into the spirit of a trip and left no one in any doubt this was a whole new thing. Live, they were something to hear and experience. “Space Farm’s greatest moments live were heard when it held down a residency at the Tabla nightclub in Auckland and many fans used to cram the place,” said Mann in 2000 about a live recording of a Wellington concert made by rock fan John Pilcher on a portable reel-to-reel recorder he carried to gigs.

Pilcher’s recording, remastered by Mann, was issued on CD (on the Hogomus label out of Hastings) as "Space Farm - Live". “Personally this was one of the periods I remember most fondly in my musical career,” said Mann. “The ’70s release of the "Space Farm" album didn’t really capture this live energy and magic, despite our best efforts, and ended up sounding a little pale compared to the live monster that used to unleash its music regularly on fans at the Tabla.” For their sole studio album a year later, the material was more economic and focused into shorter songs: five on the first side, four on the second, only ‘Gypsy Queen’ reaching beyond five minutes. In that however, it is worth remembering even Hendrix practised an almost pop-length economy on his early albums. Williams spoke to Smithies about the album’s recording at Stebbing’s in Auckland, sessions he admits he can barely recall because of their regular and heroic intake of acid. “I just remember it was very quick because [studio owner] Eldred was cracking the whip. He was a headmaster, there was no mucking around. He was a businessman, keen to record us because we were from the upper echelons of New Zealand musicians at that time, and he was counting on the underground subculture around us to buy the album.”

But, being a businessman and looking for sales, Eldred Stebbing was unhappy with Mann’s sometimes raw and slightly uncertain vocals. A few months after the album was released, Stebbing brought in former Underdogs singer Murray Grindlay to re-record the vocal parts and so the album appeared once more, but different. That later version of the album was reissued on limited edition vinyl (500 copies only) by the German company Little Wing of Refugees in 1990 as Going Home to Eternity. It came in a variation of the original cover, painted by psychedelic artist (and early Underdogs vocalist) Archie Bowie. The 2017 local reissue on Wah Wah - also limited to 500 vinyl copies - however is of the original album with Mann’s vocals and re-presents it in Bowie’s original sleeve with liner notes and wonderful reproductions of posters. There was an unheard coda to the Space Farm story, a second album recorded at Stebbing after Williams’ departure with Mann playing bass and guitar, but that album – with Krishna-conscious song titles  – was never released.

So we are left with just the "Space Farm" album in all its psychedelic and headphone glory as their sole artefact. With the guitar searing and panning between the speakers, Williams’ bass mixed high and acting like an anchor and Mann’s endearingly uneven singing, the album presents a mix of brooding ballads (‘Homeward Bound’), chipping funk rock (‘Infinity Way’), melodic acid-pop (‘Waking Dream’) and space-flight/cosmic rock pieces (‘Gypsy Queen’). It might not be as musically innovative as some might expect – it’s impossible not to hear Hendrix whispering in their ears – but it is a rare one from that fascinating period. It captures the spirit of possibilities and a time when gifted rock musicians pointed to something in the far distance, plugged in and invited everyone, with or without acid, to climb aboard their spaceship. Space Farm’s music “is as positive as the music of the spheres," wrote McWilliams in 1972, channelling Sun Ra and Jane Austen: “If it cannot be described it can be heard. Reader, become a listener.”