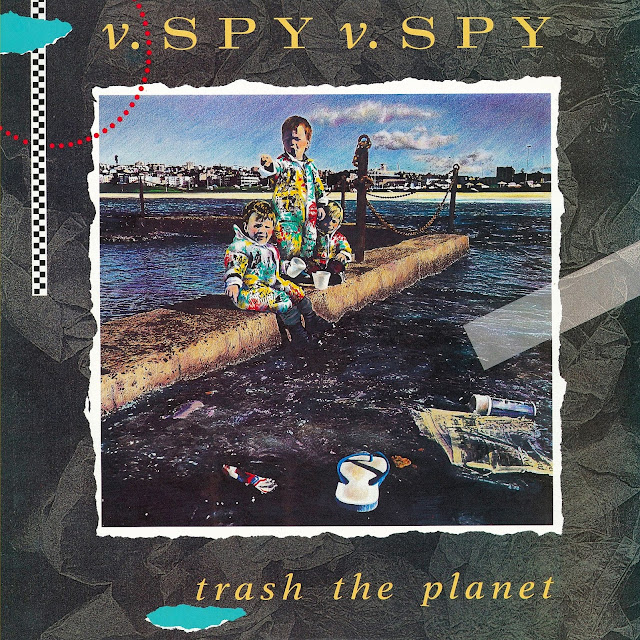 Bassist Craig Bloxom and guitarist Mike Weiley first met each other at Nelson Bay High School in 1976 when, having just moved from England to Australia, Weiley was paired with Bloxom by the principal based on their common musical interests. The two quickly discovered a common interest in David Bowie. After high school, Bloxom and Weiley moved to the Sydney north shore suburb of Cammeray, playing in various Sydney bands. Looking for a drummer, one of Bloxom's ex-bandmates introduced Cliff Grigg, who happened to live in a squat in the inner Sydney suburb of Glebe. Pretty soon the three began sharing the same squat, using it for rehearsals. They knew the band had cliqued as "everything came together right, in the sense that we either sped up at the same time, or we slowed down at the same time".

Spy vs Spy scored their first gig at Sydney's Sussex Hotel, filling in for The Fast Cars, whose singer had unexpectedly taken ill. From there the Spies developed an enthusiastic pub following for their distinctive brand of angular ska-flavoured indie rock. Dirty Pool management picked them up and they then did many Sydney gigs, particularly at the Sydney Trade Union Club, often supporting INXS. Other notable supports were The Clash at the Capitol Theatre and U2 at the Sydney Entertainment Centre. In February 1982 the band set out to record, knocking back Michael Hutchence's offer to produce in deference to go with mate Simon Vidale. They recorded "Do What You Say" at T.R.M. in Surry Hills, releasing it as their first single in April on Roger Greirson's independent Green label. This led to EP Four Fresh Lemons in August, the 1,000 pressings selling out in just five days. The New Zealand release, Six Fresh Lemons, combined Four with the A & B sides of their first single.

The Spies briefly broke up shortly after but reformed in July 1983 as a four-piece with Marcus Phelan on guitar. Diluting the ska influences that had typified their early sound, the Spies concentrated more on driving indie rock sounds typical of Sydney's no-frills pub rock scene. Due to problems from the Prohias comic strip Spy v Spy in MAD Magazine, as well as a potential clash with NZ band The Spies, the band were forced to officially adopt the name V.Spy V.Spy, despite continuing to call themselves Spy vs Spy. Spy vs Spy turned a corner in late 1983. With their gig gear stolen and Phelan departed, big Spies fan Peter Garrett of Midnight Oil fame got to know the band and introduced them to Midnight Oil's manager Gary Morris. The Oils' label, Powderworks, released the Spies second EP Meet Us Inside in October 1984, plus the accompanying single "One of a Kind" in November. First album Harry's Reasons was released on Powderworks in March 1986 to critical acclaim. Singles included "Injustice", about the plight of Australia's aboriginal communities, and "Harry's Reasons", about a friend's heroin addiction, "Harry" being a local nickname for heroin. The Harry's album also featured the Spies great cover of the "Dangerman" theme, a firm favourite with Spies audiences.

A switch of label to WEA saw second album, A.O. Mod. T.V. Vers., follow very soon after. The name is an abbreviation meaning "Adults Only Modified Television Version", a very common censorship notation appearing along the bottom of Australian television screens at the time (when censorship was quite conservative). In keeping with the Spies strong social awareness, singles released from this album were "Sallie-Anne", an ode to murdered prostitute Sallie-Anne Huckstep, "Credit Cards", a comment on spiralling debt and empty consumerism, and "Don't Tear It Down", inspired by the N.S.W. Dept of Main Roads seeking to demolish the band's Darling Street squat. After having toured the A.O. Mod. T.V. Vers. album without a break, WEA demanded another album. Thus Xenophobia [Why?] was written and recorded in just six weeks, the title being inspired by race issues surfacing in the lead-up to Australia's upcoming 1988 Bicentennial year. Singles released were "Forget About The Working Week" and "Waiting". Certainly the Spies were by now at the peak of their fame, playing smaller shows to dedicated fans in Sydney under pseudonym The Drug Grannies.

In 1989 the Spies went to England to record Trash The Planet at Richard Branson's Manor House studios, the album being released in November. Grigg, being very unhappy by the sound of the drums on the album, eventually left the band in late 1991 and Bloxom and Weiley took a year off. This more or less marked the end of the peak period of Spy vs Spy. Trash the Planet was recorded at the Manor studios in Oxfordshire UK with Craig Leon producing. It was the hottest summer in English history and I got viciously bitten by "Bowser", one of Richard Branson’s Irish Wolfhounds while doing the mix-down. I couldn’t walk for 3 weeks after that, because the huge hound of hell took a chunk out of my leg the size of a small volkswagen. I still walk with a limp and have a fear of small puppies. We spent more money on this album than any other and lived the life of rock stars by the pool out the back of the Manor while we worked on the album. Our manager at the time (he fleeced us, big time) brought his wife & child and enjoyed our money while it lasted. We grossed $960,000 from live shows in 1989 and where did all the money go? Up in smoke, thanks to management by sharks, the timeless story of rock bands the world over. Oh, by the way we spent two thousand English pounds on alcohol while making Trash the Planet. Well done boys!

The Spies returned to touring in 1993 with new drummer Mark Cuffe. Now signed to Sony, 1993's Fossil album completely bombed, causing the Spies to consider another split. However, due to the influence of Australian surfers in Brazil, the band had by now built up a considerable Brazilian following, so the Spies stuck with it for several Brazilian tours. Around this time, Bloxom and Cuffe undertook side-project Shock Poets, meanwhile Weiley worked on his side-project The Honey Island Project. By 1997 Cuffe left to concentrate full-time on Shock Poets, replaced for a time by ex-Icehouse drummer Paul Wheeler. Touring spasmodically in Australia and Brazil, Spies bassist and unmistakeable frontman Craig Bloxom eventually played his final Spies gig in Sydney in 2003. Citing exhaustion and disillusionment from alcoholism, Bloxom underwent rehab at The Buttery, eventually leaving Australia for the USA, finally settling in Mexico. The original Spy vs Spy was therefore officially defunct thereafter.

Weiley and Cuffe re-formed in August 2006 to tour as an altogether new entity with Cuffe on vocals. This band, known simply as The Spys (to differentiate it from the original Spy vs Spy), play several brand new songs while the old original Spy vs Spy songs "get a fresh treatment". Their 1989 album 'Trash the Planet' peaked at #22 on the ARIA Charts and stayed in the charts for 6 weeks. None of their subsequent releases reached the Australian Top 40. The band split and reformed a number of times but still developed a strong following in Brazil.