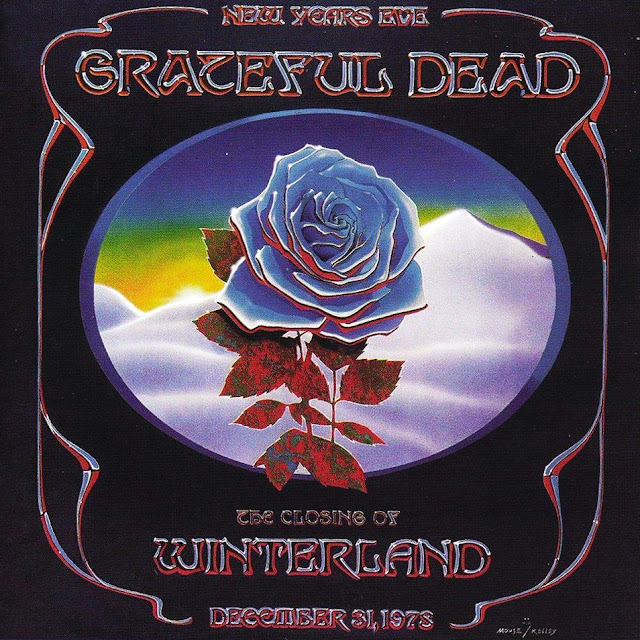 Following an earthquake in San Francisco, California during the year of 1906, Winterland was born. If one did not already know, "Winterland" is an arena. It was named "Winterland" for the reason that it was originally built to be an Ice skating arena. Which is of course what it was. In 1967 ("The summer of Love"), Bill Graham, the owner of The Fillmore in San Francisco decided to buy it. He had quite a bit of money. Mainly because of the tremendous profit the local scene had been bring in. Bands such as The Grateful Dead (And bands inside of the "Dead Family"), Jefferson Airplane, The Big Brother & The Holding Company, The Quick Silver Messenger Service, The Doors, Santana, ect, were all friends of Bill, especially The Dead. Each of those bands also began to gain quite an underground following, so it was only natural that they'd play were they were most welcome. And also, because "Acid Test" were commonly held at The Fillmore. "Acid Tests" are parties strongly based on the usage of the Psychedelic drug acid or LSD.

So as I said, Mr. Graham bought Winterland. He, being a concert promoter, of course would turn the Ice arena into a concert hall. Though, nothing short of demolishing the arena would do it good. The walls and ceiling were definitely not shaped for music. Bob Weir even called Winterland an "Acoustical Snake pit". But, obviously that did not stop Graham. Over the years many acts were coming to the arena. Most importantly and most commonly The Grateful Dead. The played the venue so much that they knew how to change and play their songs to adapt to the terrible acoustics. So, playing at The Winterland was always a surprise for a Deadhead who hadn't seen the band play there. Though the arena had been up for some time, the income was low. So Winterland would of course be shut down. But definitely not before one blow out. Bill decided to request that his good friends The Grateful Dead would appear and play a long night that started spanned through two years and only two days. New Years Eve and New Years Day of course. Few days have most excitement

Along with The Grateful Dead, friends of both the band and Graham were invited. Special guests being the leader of The Merry Pranksters and writer of "One Flew Over The Cuckoo's Nest", Ken Kesey; The Blues Brothers, Dan Aykroyd and John Belushi (John not documented, because he has not features on the recording); and various other contributors and musicians. At the time of this happening, The Grateful Dead had kept a line up for an okay amount of time. They had lost original organist Ron "Pigpen" Mckernan to a form of liver disease. They had replaced him when he was incapable to perform with Keith Godchaux. His wife Donna Jean Godchaux, actually managed to get him the audition by approaching Jerry Garcia. Over time, Donna Jean would also contribute a good amount of vocals to some Grateful Dead songs. I must say that she has quite a fabulous voice. She almost resembles Janis Joplin.

Disc One of Closing of Winterland could not have had a better intro. The crowd is heard, and the voice of Dan Aykroyd can easily be spotted. He speaks to the audience about the giant joint of marijuana hanging over their heads :p. From there he presents the count down to 1979; the final year of the '70s. As the countdown ends and everyone screams, The Grateful Dead go right into "Sugar Magnolia". "Sugar Magnolia", a beautiful, happy Country Psychedelic tune that could not have been a better pick. The beautiful composition is definitely a live favorite, and a favorite that is written and sung by Bob Weir. Following "Sugar Magnolia" are two almost Reggae numbers. Garcia said himself that he'd been heavily getting into Reggae during the almost mid '70s. With the entry of Bob Marley and The Wailers, it was hard to miss. "Scarlet Begonias" starts of the Reggae chain. The song is quite lively, but nothing compared to the album's previous track. Next up, would be "Fire on the Mountain". A subtle sounding tune, with interesting sang lyrics. Almost poetry. The feel and rythm to the song are extraordinary.

Following, the three honorably mentioned opens is a cover. The track "Me and My Uncle" is a slightly fast paced "Wild West" themed song. Weir sings the common Grateful Dead live cover with the a very convincing attitude. Along with Weir's great vocals and Jerry fantastic lead interludes, the lyrics tell a great story. The story is about a young man traveling down West with uncle. Through various escapades, the two end up in a gun fight during a poker game with some rough cowboys. The nomads manage to get out alive and steal the game's pot (Which was gold) and "Hightail down to Mexico". Through the years the uncle teaches the boy his ways of theivery and evil tasks. His uncle taught him so well, he "Grabbed that gold, and I left his dead ass there by the side of the road! Yaw!".

The Dead follow the story told track with a filler in my opinion, "Big River". The song is merely mediocre, but instrumentally well down. Right after comes The Grateful Dead classic "Friend of The Devil" which was rarely played live. As I said before, over time The Dead adapted some of their songs to the acoustics in the oddly shaped venue. So, this version of the rapid acoustic piece, is slow; less technical, and a bit more boring. But it is very interesting to hear. Right after, the odd cover comes three tracks that are well played and overall good, just nothing to rave about. But finally, to finish off the first disc comes "Sunshine Daydream". You may know it has the outro for "Sugar Magnolia". Oddly enough, that is exactly what it is, just with eight tracks in between. Being the exit to a Weir song, Weir mainly sings it, but is accompanied by Donna Jean. Who can just simply add to the greatness.

After a small break during January 1, 1979, The Grateful Dead open up with a tune named "Samson and Delilah". The track opens with some interesting dual drumming from Hart and Kreutzmann. I've always loved their flow together. Throughout the song, soulful vocals lead the way, but the song is no highlight. Next, is their popular "Ramble on Rose". Which is a very subtle song filled with analogies and other great writing forms and such. The Dead's flow is good, but I have heard many versions and this would not be close to the best. But a good song none the less. This second disc would begin it's end with a surprising heavy song for The Grateful Dead. "I Need a Miracle" is a song sang with powerful vocally expressed despressing lyrics. Which is always interesting to hear. The song is great in my opinion. "Terrain Station" is up next. The song is very good in my opinion. It brought The Dead back to their Psychedelic sound when they weren't playing in the '60's. and finally, "Playing in The Band" comes up. A definite and perfect Dead classic. No, live performance could live up to it's recording, but it is always a joy to hear. The vocals are sang by Bob, but the lyrics are written by Hart, Weir and Hunter. Everything about the song is just perfect, and lacks nothing. Perfect closer for this disc.

Disc Three lacks good amount of songs that it should have, but makes up for it with song lengths. The songs clocks at 19:23, 19:34 and 19:19. So, obviously each song takes up a lot of space. The disc opens with "Rythm Devils" a drum piece that really blows me away near the end with it's rapid percussion combined with some great overall drumming. Next up is "Not Fade Way". It is a very common cover for The Dead especially live. Not only does it include some great jams, but the vocals in unison are fabulous. I'm 100% sure you have all heard this song. And ending the disc would be is a Bluesy Chuck Berry cover. The song is slightly boring, but nothing to hate. It's just nothing special at all. A lot of Blues easily bores me. The ending set on Disc Four here contains a whole bunch of known hits, and besides that some very good songs. There's not really one okay song on here, they're all great. The CD starts off with the well known Psychedelic jam "Dark Star". "Dark Star" is both the 1st and second track on this disc, the free Jazz jam entitled "The Other One" is played in between each section. The bass playing in "Dark Star" is just great, it matches up with each instrument fantastic and the riffs are always memorable.

Right after the second section of "Dark Star" would lie one of my favorite Dead songs. The mysterious "Wharf Rat". The lyrics are better than ever. There are various hints and odd writing forms tell the story, and make it seem like the lyrics are being sang about this Wharf Rat or by this Wharf Rat. One great hidden trick in the lyrics is that his low life, depressed man's name is "August West". "August" representing the end of bliss, like August ending Summer. And "West" being where the sun sets, or end. So, obviously the end of his life is near or expected. He also has a girl he loves named "Pearly Baker", who he loves more than his wine. "Peerly Baker" is the name of a Reverend (I believe) who was for prohibition, back in those days. The being said, the song is amazing.

Following, "Wharf Rat" is "St. Stephen". "St. Stephen" was off of The Dead's master piece Aoxomoxoa. Which was hugely Psychedelic, as is this song. The music is technical, but jagged and choppy. Which easily fits the song best. The tempo and key changes in this tune cannot be better. Through the rest of the album The Dead cover Chuck Berry's "Johnny B. Goode". which brings out a very lively and wild side of them; "Casey Jones", there hit off of Workingman's Dead, that is written about a commonly sang Folk story; Good Lovin', an R&B cover, commonly sang by former member Pigpen. And finally, the album ends with "We Bid You Goodnight". A beautiful farewell, passion filled chant only supported by vocals, clapping and some tambourine work. Soon after, Bill comes out and thanks all the guest, and comments on all of The Dead's past achievements inside of Winterland, and thanks them of course. Well, this album is surely fabulous to listen to, and just made special being that it's for a reason. I have heard better live albums by The Grateful Dead, but this is surely fantastic in it's own way.