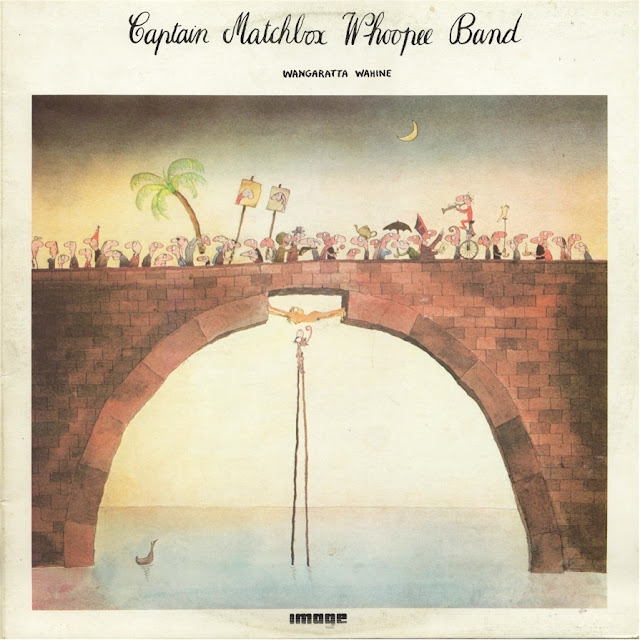 The Captain Matchbox Whoopee Band was an Australian band, active throughout the 1970s. It was based in Melbourne and centred around singer and multi-instrumentalist Mick Conway (Captain Matchbox) and his brother Jim Conway, who is widely regarded as one of Australia's finest exponents of the blues harmonica. Original line-up: Dave Hubbard (vocals), Peter Inglis, Peter Scott, Mick Fleming, Jim Niven, Mick Conway, Dan Hicks Back in 1968, Mick Conway and his brother Jim formed the Jelly Jug Band as a joke to enter a talent quest. To their astonishment, they won. The Captain Matchbox Whoopee Band emerged from the Jelly Beans in 1969. They began playing regularly at any venue that lent itself to their theatrical music style. In particular they played the Much More Ballroom in Melbourne They organised a National Jug Orchestra from jug bands all over the country in April 1972.

The band's first single, "My Canary Has Circles Under His Eyes", hit the national charts in November '72. However, they experienced a major split shortly afterward. In the interim came a single, "I Can't Dance (Got Ants In My Pants)", and early in 1973 their first album, 'Smoke Dreams'. After a period of recess, the band reorganised, and by September the line-up had consolidated to its more notorious format as follows: Jim Niven (piano), Mick Fleming (banjo, mandolin, guitar); Jim Conway (harmonica, kazoo, recorder); Mick Conway (vocals, horn, ukeh) Geoff Hales (drums); Fred Olbrie (violin, guitar, harmonica); David Flett (sax, flute); and Dan Hicks (guitar). Changes in line-up were characteristic of the band, perhaps because it was more a theatrical unit than a rock group. During 1974, two more singles emerged: "Your Feets Too Big" and "Hernando's Hideaway". At the end of the year came the 'Wangaratta Wahine' album. It featured old standards as well as originals by Mick Conway and David Flett. Also during the year, John Snyder worked with them on guitar.

The group became a TV regular and toured extensively throughout 1975. The year also saw the departure of Geoff and Dan to be replaced by Chris Worrall (guitar) and Manny Paterakis (drums), and was rounded off with their third album, 'Australia'. The change was followed by Fred leaving, to be replaced by Jack Saram. By mid '76, another upheaval occurred when Graeme Isaacs joined, filling Manny's shoes on drums. The band then consolidated as a six piece unit (Mick C, Mick F, Graeme, Jack, David and Gordon McLean) and embarked on a campus tour.

Then, in November, the group again reformed, becoming part of a fifteen member theatrical touring act set up by the Australian Performing Group. The whole group adopted the name 'Soapbox Circus', and two new faces - Peter Mulheissen and Rick Ludbrook appeared (David Flett was the notable omission from the new unit). A live album, 'The Great Stumble Forward', surfaced in June 1977. A single, "If I Can't Hav-Anna In Cuba" followed. The end of the year saw the band performing a play called Smack In The Dacks, and by 1978 the band was known simply as Matchbox with the line-up now comprising Mic, Jim, Ludbrook, Mulheisen, McLean, Tony Burkys (guitar, ex-Original Battersea Heroes) and Stephen Cooney (guitar, later of Redgum), who was replaced by Louis McManus (ex-Bushwackers). Matchbox released the Slightly Troppo album, and the delightful single "Sleep" (June 1978), followed by "Love Is Like A Rainbow" (January 1979), as well as making an appearance in Tim Burstall's 1979 feature film version of the Jack Hibberd play Dimboola.

By mid-1979, the line-up of the Conways, McManus and Mulheissen had been augmented by Robert Ross (drums, ex-Manning), Eric McCusker (guitar) and Chris Coyne (sax, flute). That version of the band introduced a more rock-oriented sound, but it lasted only about a year; McCusker left to join Ross Wilson's Mondo Rock and was replaced briefly by Peter Martin. In its final incarnation as 'The Matchbox Band', the group released one last recording, an independent single, "Juggling Time" / "Dirty Money", before breaking up in September 1980.