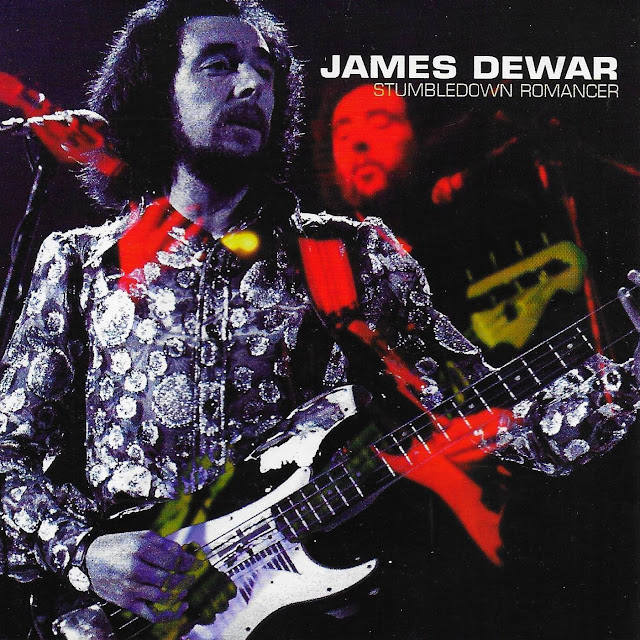 If you have ever listened to the original Stone the Crows or Robin Trower at his peak, then you've heard the voice of James Dewar. The Glasgow-born singer is one of a legion of great Scottish vocalists who brought a soulful passion to their music. Dewar's career began in the early 60s. While still a teenager he sang and played bass in the Gleneagles alongside Alec Bell (guitar), Ross Nelson (guitar), Jimmy Smith (saxophone) and David Miller (drums). By 1963 they were the resident band at Glasgow's Lindella Ballroom but their fortunes changed dramatically one night when a diminutive girl vocalist got up to sing with them. Marie McDonald McLaughlin Lawrie was barely fifteen, but her confidence was overwhelming. She joined the group, which quickly took another name inspired by the new arrival, Lulu and the Luvvers. Jimmy Dewar left the group in 1965, returning to Glasgow to rethink his career.

By 1967 he could be found in a new band, Sock 'Em JB, an exciting unit fuelled on material by Otis Redding, Sam and Dave, and Wilson Pickett. The vocalist was ex-Del-Jack Frankie Miller and the pianist John McGinnis, formerly of the Blues Council. Sock 'Em JB were together for only a matter of months, ending when Miller formed a new group, Westfarm Cottage, en route to the Stoics. Dewar and McGinnis remained together and, by the following year, had formed a new tough-sounding band, blending blues and progressive rock. They were preparing to be the resident act at a new club, the Burns Howff, when Leslie Harvey and Maggie Bell walked into a rehearsal. After a jam it was suggested they join forces and Power was born. With Bell on vocals and Harvey on guitar, the unit gelled perfectly and they quickly became one of Glasgow's most popular attractions. In 1969 Peter Grant, Led Zeppelin's manager, came to Glasgow to see them and within a matter of months they had won a management and recording deal. Renamed Stone the Crows – and with the addition of ex-John Mayall drummer Colin Allen – the group recorded two excellent albums, Stone the Crows and Ode to John Law. Bell's passionate voice and Leslie's fluid, economical style may have defined the band's music, but Dewar's role should not be underestimated. His playing was always sympathetic and his earthy duets with Bell were genuinely moving.

'He's one of the finest singers I've ever heard,' she said in a later interview. However, the axis of the band had moved – the singer and guitarist were also a couple – and both Dewar and McGinnis were unhappy with the diminished role they now played in the group they had formed. Both quit in February 1971. 'I had to get Jimmy Dewar in a band', Frankie Miller told me in 1992. 'He was doing nothing in London.' The band in question was Jude, formed in July 1971. Miller had quit the Stoics, but Chrysalis, with whom he had a publishing deal, suggested he pair with guitarist Robin Trower, who had recently left Procol Harum. With Dewar on bass and Clive Bunker (ex-Jethro Tull) on drums, Jude seemed like a marriage made in heaven, but it was not to be. 'I wanted to do the two-vocal thing,' Miller explained 'but the vehicle wasn't right. The best thing for Jimmy to do was to sing in a power trio with Robin.'

In September 1972, this is exactly what happened. A new group, dubbed 'Robin Trower', made its début in Vienna with a line-up completed by Dewar and drummer Reg Isadore. Two enthralling albums, Twice Removed From Yesterday and Bridge of Sighs, followed, on which Trower's searing but melodic guitar work was matched by Jimmy's soulful voice, fully free at last to express emotion and empathy. Another former Procol member, Matthew Fisher, produced both sets and the understanding he showed with Robin and the group was clear to hear. By 1974 Robin Trower were established on the US circuit and when ex-Sly Stone drummer Bill Lordan replaced Isadore, a more rhythmic texture came to the fore. For Earth Below (1975), Live and Long Misty Days (both 1976) ensued before another ex-Sly member, Rusty Allen, took over on bass to allow Dewar to concentrate on vocals. In City Dreams (1977) and Caravan to Midnight (1978) were completed before Allen quit and the group reverted to a trio for Victims of the Fury (1980). This was the last Robin Trower album to feature Dewar. The guitarist and drummer formed a new band, BLT, with ex-Cream bassist Jack Bruce, while Jimmy gradually dropped out of professional music altogether.

During the halcyon Robin Trower era, Dewar recorded this solo album, but was not released until the 90's. Matthew Fisher was again on hand for the bulk of the recordings, producing and adding organ, piano and synthesisers. Other collaborators included Andy McMasters (ex-Motors), who wrote or co-wrote some of the material, John Platania and David Hayes from Van Morrison's Caledonia Soul Orchestra, and Fairport Convention drummer Dave Mattacks. The set includes three cover versions: the Rolling Stones favourite Out of Time (re-cut around the same time by fellow Scot Dan McCafferty), Buddy Holly's Heartbeat and the Drifters' Dance With Me, the last of which is beautifully understated. Indeed the entire selection is nicely restrained, a contrast to the sometimes turbulent sound of the Robin Trower band. The ease with which Jimmy tackles Lay Down the Night, Sands of Time, and the Christmas anthem Hosanna!, confirms his talent, but the undoubted highlights are the Dewar / Fisher composition Nature Child and the same team's title track. The mastery with which the singer approaches this melancholic piece is moving: warmth tinged with regret, and perfectly controlled, a self-portrait which sums up the poignant artistry of the whole collection.